There is a Clear Channel bus shelter on Kensington High Street (an upmarket suburb in London) that proudly shows a large NFC icon.

As I have one of the few commercially available NFC handsets in the UK (a Blackberry 9900), I decided to turn on the NFC function and tap my phone on the big blue NFC logo.

When I did this, this is what I received. 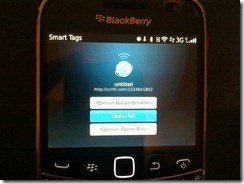 Clicking on the link delivered the following 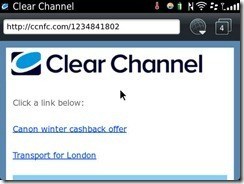 The Canon winter cashback offer directed me to www.canon.co.uk/wintercashback 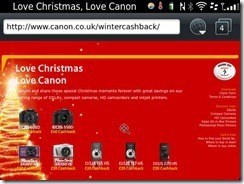 which is a NON mobile optimised website, as a result of a mobile NFC read on a poster that is outdoors.

NFC fail – so NFC yet so far – a long way to go Clear Channel.

I know that your London Digital 6 sheets are all the rage, and you are promoting “interaction through NFC and social media”, but you need to make the target content viewable on a mobile!

A few weeks ago, one of the panels on this outdoor screen encouraged me to “tweet how you’re feeling as a colour to @cc_play” 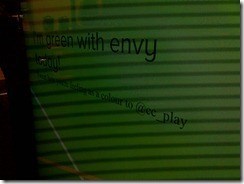 I did this – received no response and I am the ONLY follower of the @cc_play account!

If this is interaction through NFC and social media in 2011 then we have a loooong way to go!

I wonder how many advertisers being sold the “London Digital 6 sheets” are being given the NFC/twitter stats on these posters?

Hats off to Clear Channel for trying though!