London is a diverse and interesting city, and having lived here for the last 2 years I am constantly amazed at the interesting people I come across each week.

This morning I attended a social networking event, and met Mario Cacciottolo who has a really interesting concept and website called someone once told me.

He has an even more interesting story behind how the project started, but in summary, he is travelling the world taking pictures of people holding up a hand drawn sign with something “someone once told me”.

You will have to wait a few weeks before you see my picture and quote, but the website already contains many others who have consented to having their picture taken along with something that someone once told them.  The picture above has the quote “always be nice you never know when you are talking to an angel”.

This is a great idea on a number of fronts – we discussed having Mario attend a workplace and having everyone participate as part of a teambuilding exercise. This concept could even be used for pictures of your staff on your corporate website to give it a more personal feel.

I also suggested that these stories (Mario takes a series of pictures and a quick audio recording of the story behind the quote) could be made into small mobisodes for distribution via mobile.

The Mofilm film festival has a competition with a €10,000 prize for the best short film – and is being run in conjunction with the GSMA for the Mobile World Congress to be held in Barcelona next February.  I suggested Mario look at packaging his stories up and entering.

I would encourage you to visit someoneonetoldme.com and get involved. 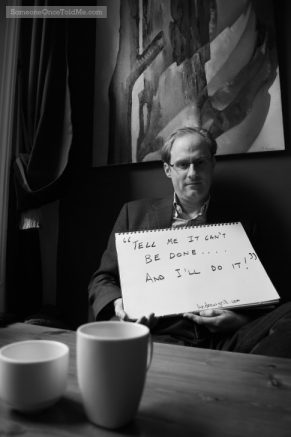 The site even has the ability to send your own SOTM photos in.
Each day the website displays a new photo, so he is always looking for new quotes and participants.

UPDATE: See what this pose looks like on the site.

As always, London and the mobile/social media industry is full of surprises.