No doubt many people around the world are aware that Eurostar passengers were subjected to some fairly uncomfortable experiences over the weekend as 5 Eurostar trains broke down as they entered the Channel Tunnel.

The issue seems to be the rapid change of temperature a the trains entered the channel tunnel from the French side (freezing conditions outside the tunnel and the 25 degrees celsius inside).

The story “broke” on social media via Tech Crunch on Saturday morning via their post “As hundreds of Eurostar passengers languish, Eurostar ignores Twitter”

You can also see how traditional media such as the BBC reported the incident.

UK social media agency We Are Social posted a note about today’s Eurostar crisis on Sunday to summarise how they were helping with the response as Eurostar are one of their clients.

In a refreshingly honest post, MD Robin Grant mentioned that they had actually suggested a real-time listening team to Eurostar and will be implementing this in early 2010 – as Robin posted below:

When we first met with Eurostar, as we do with all of our clients, we talked to them about the need for to put a real-time social media listening and responding programme and crisis plan in place, and proposed a conversation audit and consultancy project to help them implement such a programme. As is common with any business at the early stages of coming to terms with social media, they could see the long term benefits of such a strategy, however as adapting their existing processes had wider implications across the business they decided to start small by moving forward with the Little break, Big difference campaign, to learn from the experience of engaging in conversations in social media.

Interestingly people (on social media) are calling We are Social the “Eurostar PR agency” – this is probably not correct but it shows you that on social media people are not only hungry for information but also quick to blame (and that blame can be amplified quickly on sites like twitter).

In a review of the whole situation, perhaps Robin and the team at We Are Social could have quickly tweeted “we’re camped here inside Eurostar HQ getting you info as soon as we can” – to let people know they are on the case.

There is nothing more reassuring to hear the wailing sirens of a the police/fire brigade or ambulance crew nearby to know that help is on its way – and it is time to keep clear and let the professionals do their work.

In this case, the sirens were off while everyone attended to the crisis, but Robin would not be defending his agency had he publicly put the sirens on.  This is not a criticism, but a key take-out to all the rest of us should we find ourselves or a client in a similar situation in the future.

One of the key observations of social media (and the web in general) is that now information is so freely available, sites like twitter can completely bypass armies of PR people.

The public can now easily sense if information is being withheld and therefore start to criticise those withholding it (or anyone else close by).  It is advisable then to be as transparent as possible via all mediums, and if you don’t know what is going on – say why – and suggest a reason.

For example, it has come to light that some of the communication issues were because of tunnel protocol where all incidents are under the control of Eurotunnel.  Compounding this is the fact that there are no mobile phone services in the channel tunnel – so citizen journalism is blacked out and we need to wait for the standard chain of command to update us – at the same time as they are effecting a rescue.

So what are the key learnings from this experience (and yes Mr/ Mrs/ Ms Communications Director of any size company you need to read this also):

Why not station someone in the operations team who is running the twitter channel in a crisis like this? 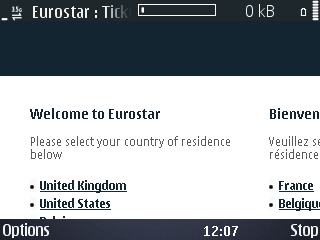 Dave Black said in a post back in September, and is completely relevant in this Eurostar case:

The answer isn’t marketing in the awareness sense, although that’s an important part. The real answer is operations, the place within an organization (often along with product management) where goods and services are created and delivered.

Marketing sets the expectation, marketing creates demand, marketing helps a consumer differentiate why one choice is better than another choice.

Any gap between the two drives a conversation on the social web.

Over the last few months, I have struck company after company who KNOW they need to get into social media (as Robin’s quote showed about Eurostar), but they are not sure HOW.

The barriers faced (in no particular order) seem to be

Each of these statements deserves deeper analysis and will be the subject of a later blog post.

For now – let’s see what we can learn from the “Eurostar 19-12 incident” and use this as a template to help educate clients about what can happen when you think you should be doing something in social media, but don’t follow through.

As Rachel Clarke points out correctly, this is a communications failure not a social media failure, however all of the noise on social media (funny that) has pointed the finger at social media.

I try not to point fingers, because they can easily be pointed back at me – and also I’m keen that we as an industry learn from this and also use it as a catalyst to promote genuine discussions with brands wavering about adopting social media.

I am sure in many meetings this week and into new year they will be discussing this and ways to avoid their own “Eurostar moment” in 2010.

For one – you need to