It must be a slow news week, because a recent Daily Mail article by Jason Lewis titled

How ‘BT Sarah’ spies on your Facebook account: secret new software allows BT and other firms to trawl internet looking for disgruntled customers

seems to suggest that companies that are actively seeking our customer feedback on public websites like twitter are somehow “spying” on customers. 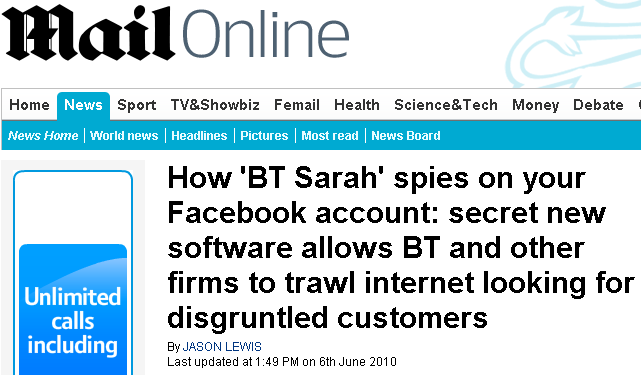 Now I know that sensational claims like this sell newspapers, and hence advertising but I doubt the Daily Mail readers will see this as more than just a beat up.

They claim there is “secret new software” that is “trawling the internet looking for disgruntled customers”.  Debatescape was developed by BT a couple of years ago, and it would only be able to look at information from public sites, or those who have chosen to make their Facebook news feed public.  Nothing secret or sinister here, and it’s existence is not secret – just look at the bottom of each @BTCare tweet – it says “xx minutes ago from Debatescape”.

In fact when you look through the sensationalist claims in the piece, it is actually an endorsement for companies such as BT, Carphone Warehouse etc listening to customer concerns and acting on it.

Indeed companies that I talk to that are listening to social media channels are finding that they not only are they becoming more responsive to customer needs, but also the cycle time for new product development is reducing because instead of lengthy and expensive traditional “clipboard in the street” market research, they get real-time honest and unaided feedback.

Indeed I ONLY deal with some companies via twitter.  Both @BTCare and @vodafoneuk know me well as this is my preferred channel for contacting my technology suppliers.

My prediction is that within 5 years (possibly sooner), traditional call centres will be cross-disciplined with agents handling phone, email and twitter enquiries as the normal course of doing business.

As I have been saying for some time now, in social media it is about

Through my work with Visible Technologies here in the UK, I speak with companies and agencies every day of the week about how they can start to listen, then eventually engage with customers via publicly available social media channels.  This is not spying, but instead honestly listening to customer feedback.

The Daily Mail article is actually a back-handed compliment to those that are already listening and learning, and are now engaging with customers. The 4th part of the “listen>learn>engage>” story is “integrate” and this is about companies putting social media and the learnings from their interactions via this channel to practice and improving and enhancing the customer’s experience.

It is not about spying – it’s about being more in tune with what people are saying about you – both good and bad.

My advice to clients is always that if people think your product is poor and bother to vent about this using social media, you have an amazing opportunity to put it right and turn detractors into advocates.

One concept we will start to hear more of in the coming months is Peer Advocacy, and the trend to stop blindly believing advertising before a major purchase or decision, and instead asking your friends and social networks their opinion on a product or service.

Social media is here to stay, and those companies embracing it with both hands should be applauded, not accused of spying.

A quick search shows that his website has not been updated since the election.  Not great “engagement” from this Lib Dem MP.