This was first posted in June 2010. By now everyone knows that news that on the weekend, the ITV High Definition (HD) channel missed the first goal scored by England due to an “interruption”.

it was actually an ad.

While many people have (rightly) beaten up ITV and their commercial approach, the incident points more towards how things will look “beyond advertising” in the future, and what we need to learn now about these new channels of mobile and social media.

We all appreciate that programs like the World Cup have to be paid for by advertising and sponsorship, but when you interrupt the utility of the channel people get angry.

Advertising 2.0 (or beyond advertising as some smart agencies are calling it) is the next wave of marketing communications being developed at the moment to embrace these new channels.

The answer is no – you don’t “advertise” on social media – it’s all about taking part and having a conversation – just like real life!

The slide below I show about half way through my presentations, and I explain it the following way. 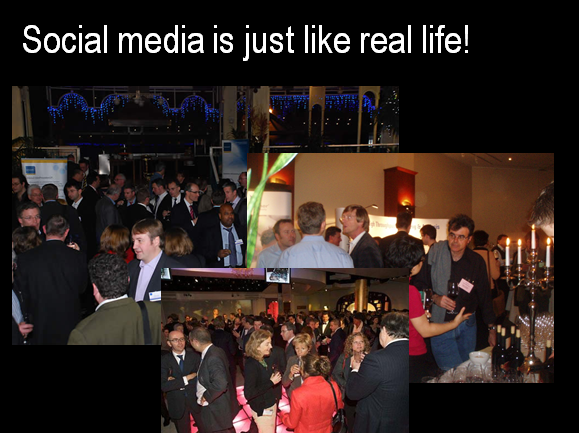 “…after my talk, we have a coffee break. Many of us will head out and form groups and “follow” one group that looks interesting or is made up of people we know. Those groups we are not interested in we “unfollow”. Following and unfollowing – sound familiar?

Now if one person was to interrupt our group (are you listening ITV?) with an ad for their company, then we would be very annoyed as it would interrupt the conversation of the group”.

I then go on to say that social media is just like real life.

The last few times I have presented this view this was in front of financial services audiences (probably the slowest of all industries to take to social media). In each situation, delegates were furiously nodding at me and writing notes.

My point is that everyone is trying to make out that social media is incredibly complicated – but the fact that I have been able to summarise it in a sentence gets people thinking.

The issue however is that none of us are “trained” in conversation marketing – we are all programmed on reach and frequency from the various marketing courses we have taken.

Indeed it seems that the advertiser Hyundai has been stung by the blunder as well. Probably not the effect that had hoped for when they commissioned the ad – such is the power of social networks.

The issue of peer advocacy is another area that will feature strongly in these social networks as people shun traditional advertising and look to their own networks for product recommendations. Perhaps soon we as an industry will be talking about “beyond advertising?”

With social it is all about

“We apologise for the interruption in transmission.”