Any MBA student will no doubt remember being taught the model of group development, first proposed by Bruce Tuckman in 1965 that talks about how new teams go through four initial stages of development. 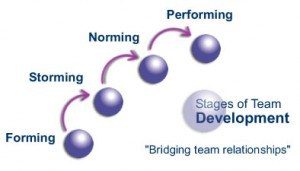 Forming: In the first stages of team building, the forming of the team takes place. The individual’s behavior is driven by a desire to be accepted by the others, and avoid controversy or conflict

Storming: Every group will now then enter the storming stage in which different ideas compete for consideration. The team addresses issues such as what problems they are really supposed to solve, how they will function independently and together and what leadership model they will accept.

Norming: The team manages to have one goal and come to a mutual plan for the team at this stage.  Some may have to give up their own ideas and agree with others in order to make the team work.

Performing: It is possible for some teams to reach the performing stage. These high-performing teams are able to function as a unit as they find ways to get the job done smoothly and effectively without inappropriate conflict or the need for external supervision.

When I studied this mantra of “Forming, Storming, Norming & Performing” during my MBA, it helped me better understand why it is with new teams or companies people behave the way they do.

I think it can also be applied to social media communities or groups, as over the last week or so I have seen this same forming..storming behaviour around some new social media entities developed by some well known brands.

I shared this with one of my clients yesterday – when they asked me how I thought their foray into social media was going.

I also offered the advice that they needed to stay authentic, open and human and it will all balance out, once you also take into account the F-S-N-P profile.