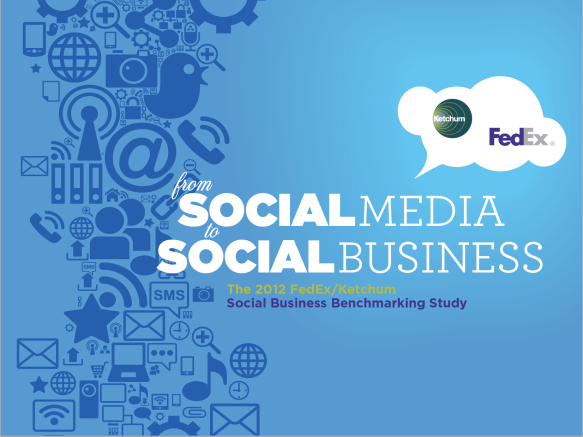 An in-depth social media study conducted by FedEx and Ketchum of more than 60 well-known companies has found that significant changes are on the horizon for the way companies will use social media tools to communicate internally.

The brands studied include

The study also examines programming, team structure and budgeting trends including how companies are increasingly working across functions to ensure collaboration on social media projects.

Interviewees also discuss why some are eager to take a leadership role in social media while others are comfortable in a more participatory role. 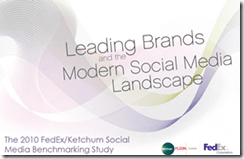 Highlights of the 39 page study include:

• 100% of companies reported some degree of social media engagement regardless of industry.

• Participants agreed that social media is a channel (not a strategy) that should be part of a holistic communication and marketing approach tied to business goals.

• Participants repeatedly stressed the necessity for transparency and authenticity in every social media program, no matter its simplicity or sophistication.

• Twitter, Facebook, and YouTube are the dominant social media platforms, but participants repeatedly conveyed the need to stay on top of emerging tools and technology in order to remain relevant.

• Organizations recognized the rise of citizen journalism and the need to engage bloggers to support brand development and reputation management.

• Participants conveyed significantly greater focus on external rather than internal social media applications, but expressed strong interest in ramping up capabilities— primarily via enhanced intranets—in 2011 and beyond.

• Organizations are trending towards more formal collaborative social media oversight models that are inclusive of diverse business units and functions.

• Most organizations do not have formal internal learning programs established to promote the development of social media expertise.

For me, the take-out quote was

“If you’re not open to feedback,
you’re not ready to play”

You can also view and download the updated 2012 report below.