I noted with interest a new website haveabeerwithmike.com.au which has been launched to support Mike Baird (@mikebairdmp), the current Member for the Seat of Manly, one of Sydney’s beach suburbs. 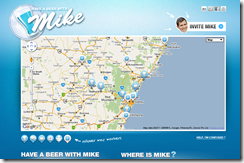 In the great Aussie tradition of “having a beer”, Mike not only invites you to book him for a beer/coffee/chat via the website, but also shows you his recent check-ins.

It is a great site, and harnesses the power of social media well.

As mentioned on the site,

“Mike wants to have a beer with you.

He wants to know what you think is great about this State, and what needs fixing.

Because Mike knows you don’t find the opinions that matter most in the corridors of power. You find them at the pubs and cafes of our towns.

The map above shows where Mike has been, where he is going, and what type of event is happening near you. So find one, and come along.

Most importantly, you can help create a new event by inviting Mike to your town. Maybe its for a beer. Or a surf. Or to visit your mums group. Or… if things get really crazy, a game of 500. No event is too big or small, so fill in an invitation and we’ll do our best to get Mike there.”

It is refreshing to see a politician being active and aware of Facebook and Twitter and using them for best effect.

Pity I no longer live in Sydney so cannot invite him for a beer, but I don’t think he needs my support.  From what seems to have been happening with the current NSW Labor Government, the Liberals (Conservatives in UK speak) of which Mike is Shadow Treasurer seem to be set to win power in the state election next month.