According to an article in the Independent newspaper over the weekend, UK politicians want an iPad to “reduce printing costs”.

According to the report

A new information and communications technology strategy, recently agreed by officials on Parliament’s Management Board, included the following imaginary scenario entitled “a possible MP’s story in 2015”:

“As I travel down on the train all the information relating to the parliamentary day arrives on my iPad, I have a quick look through, make some notes and request, by a simple tap on the screen, a printed copy of a report. Furthermore, I can create my personal agenda for the day as I go.” 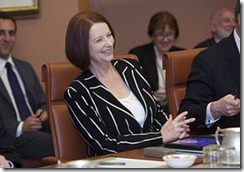 Quoting from the article in the Australian newspaper

“Before the tough negotiations began, Ms Bligh noticed that Ms Gillard was using an iPad and asked if she could use her electronic device. She was told, however, the iPads had to be cleared by security officials to ensure they could not send emails.”

Interesting that the Australian spooks need to dumb down the iPad before they let the PM loose on it.

I think MP’s should go one step further and have all of the newspapers that they read (and the press clippings) also delivered via iPad.

As I have written previously, I consume all of the major UK, US and Australian newspapers of interest via the iPad using the  PressReader app.

The FT, Wall Street Journal, Newsweek, Harvard Business Review and Business Week I all receive digitally, via dedicated apps or Zinio, except ironically Campaign magazine which is the only one I cannot get on the iPad (hurry up Haymarket!)

I know myself the number of pages of newsprint I have potentially saved over the last 6 months would run into the thousands, so if you multiply that by 650 MPs with iPads, the potential savings could actually be enormous.

I’m still waiting for the day when I can leave my laptop behind and just use the iPad – hopefully soon.