Those of you in the UK will know that over the last few weeks, twitter has made the front page of the UK newspapers as part of the #superinjunction issue. 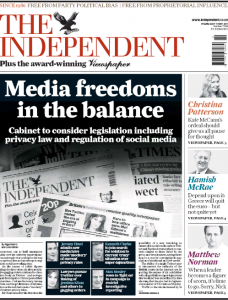 While I was in the US a few weeks ago, I was asked constantly about the difference between the US and UK adoption of social media.  As the superinjunction twitter story was all over the press that day, I had a first-hand example of how social media is disrupting age old English law.

My US friends were amazed that Twitter had become such a front page news item – and it provides a great case study for those social media doubters.

In the last 24 hours, we have seen parliamentary privilege used to have part of  a super injunction removed, allowing media to report some, but not all of the facts.  This has driven social media into overdrive to find out the other parts of the story.

So could Twitter force the UK privacy laws to change as it was suggested just a few weeks ago when the superinjunction storm first broke?

In the end, it is really about brands, personal brands, and this post looks at the lessons brands can use about how social media is now a firm part of the communications mix.

Why do the rich and famous bother with superinjunctions?

I’d hazard a guess that in most cases, the reasons for bothering with a super injunction (which can cost up to £200,000 and is “super” because you cannot even mention the fact it exists), are because if the information that is suppressed by the injunction was released into the public domain, it may impact on their (personal) brand, so they try and hide it.

Some football players that earn upwards of £100,000 per week are well known for their “off field” antics, and more often than not, they wish to keep this from the public to ensure that their earning potential is not impacted by some sort of scandal.

One of the best examples of this is Tiger Woods who famously lost many high profile, and lucrative brand endorsements when his news was made public.

So is it false advertising?

I would argue that if a celebrity portrays their image, ethics and family life in one way and behaves differently and then wishes to cover this up, it could be seen as false advertising, because the investment made by brands in having them promote and endorse products relies on how their behaviour is perceived by the general public.

So you could then compare a celebrity brand’s behaviour with the behaviour of companies wishing to hide a defect in their product, only for it to be exposed on social media.

What the whole super injunction affair (pun intended) and the use of twitter to quickly expose the details behind these legal gags shows us is that no-one, no matter how rich, famous or powerful can hide behind old world laws in the age of social media.

I am not suggesting for a moment that it is right, or just to break the law, merely pointing out, as the culture secretary Jeremy Hunt, speaking at Google’s Big Tent event in London on Wednesday, said

“…digital media has made an “ass of the law” and created an “unsustainable situation. Technology has made a bit of an ass of the law, we have this very unfortunate and unsustainable situation where newspapers are not able to print things that are freely available on internet,” Hunt said. “We have to remember that internet has been huge force for freedom before going in with big ambitions to clamp down on this part of the net.”

And he’s spot on.  Technology has raced ahead of the law.  Just as 12 years ago, “the internet” got us all connected, now social media allows us to not only talk back to brands, but to broadcast to an audience of potentially millions how we feel about a celebrity, a brand, a TV show or a product,  in real time.

What does this all mean for brands in the age of social media and hyper connectivity?

Thanks to social media, and in particular Twitter, Facebook and blogs, consumers now more than ever before have better access to information.  They also have access to each other to exchange stories (not always correct) and information with each other, bypassing completely the law, agents, PRs and whole marketing departments.

The superinjunction issue should be a wake-up call that brands can no longer hide behind marketing speak, or PR spin doctors.  Your customers will find out about your broken product, service or process sometimes before even you do.

If in May 2011 brands still doubt the disruptive power of social media, just google “twitter superinjunction”