[July 2012 update] My 2nd replacement handset crashed for good in July – would not get past the loading screen – the progress bar was stuck at the 2/3 mark.  So Vodafone kindly sent me a THIRD replacement Bold 9900 – with the latest firmware.  Seems to be ok after a few days usage.

[UPDATE] I have managed to get the phone back to the brand new state via the BlackBerry desktop manager (the first phone was completely dead).  The Vodafone team told me that there is a known issue with the Vodafone Bold 9900 version and they are trying to provide an over the air (OTA) fix, but the last one did not work.

Even though the Bold 9900 was delayed by months, it looks like they still have some gremlins to iron out.  The Vodafone team even suggested I get a different phone because they had no idea of how long the fix would take.  Now back to the initial story…

Those avid readers of London Calling will know that I’m pretty mobile savvy.  I’m often called on to present, consult or train people on mobile across Europe – so some say I know what I’m talking about.

I have owned a mobile since 1994 (Nokia N1000 AMPS model if you’re curious) and since then have owned 15 Nokias, one Motorola and two Blackberries.

I changed to Blackberry only this year after my mail client provider Goodlink decided to no longer support hosted exchange – meaning smart email on a Nokia was no more.

So I but the bullet, and swapped to a Blackberry (Bold 9780) and had very few issues – nice phone but just a wee bit small.

Imagine how excited I was when I heard that the new Bold 9900 was coming out – fast phone, touch screen, larger keyboard – a road warrior’s delight!

I decided to upgrade my Vodafone account and take delivery of a new Bold 9900.

The Bold arrived last Monday (15th September) as promised. By the following Saturday, it had succumbed to the dreaded JVM 517 error – basically the Blackberry equivalent of the blue screen of death.  It never recovers from this and you can’t plug in the desktop manager and bring it back to life. 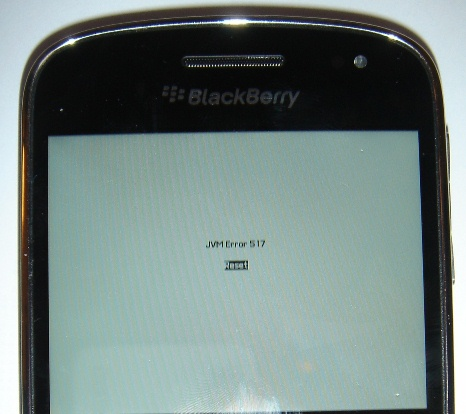 So I called Vodafone they were great and arranged a replacement which arrived on Tuesday (23rd August).

Finally finished setting the thing up again, and was mid-tweet at the #CIPR function last night in London and – JVM Error 517 on the SECOND replacement phone!

I called Vodafone when I got home (phone cannot be used in this state) and was told the correct team was away until 8am tomorrow.  I called this morning at 8am, and told that the replacement team is not there until 9am.  Just enough time to post this account of my experience with 2 brand new Bold 9900 phones.

Blackberry UK if you are listening – please get in touch.  I love the phone but I can take only so many JVM Error 517 messages.  Happy to take an unbranded Bold 9900 (is it the VF UK software causing the issue – I am using the same programs I used on the BB 9780?) and test for you, but can you give me a Band 1,2,5,6, so it will work on AT&T when I am there next month. UK BB Bold 9900s are shipped with 1,2,4 UMTS bands which only work on T-Mobile USA.

I will update you as to how this saga unfolds – annoying but hopefully Blackberry and Vodafone can provide a solution.