As the former CEO of Kred, I am often asked …

It is a fair question as there are a number of other more established influencer platforms in the market, and only now are major brands starting to understand how powerful influencer marketing can be.

The “how are you better than” question can easily be answered in a tweet as we have very different approach to Kred’s rivals.  Kred is…

Taking each key difference and expanding

1. Real time – Kred has had access to the Twitter firehose since November 2008 via a partnership with Twitter (one of the handful of companies around the world that have a direct connection to the firehose, and as such they don’t go via a 3rd party).

This means that they have built a platform that can handle tweets in real time.

As such Kred scores are updated every 1/2 second and your updated score and the Tweet / Facebook post that generated that score is always available on your live Kred activity statement – like a frequent flyer statement for influence.  Other platforms update scores on a daily or weekly basis.

2. Fully transparent – having a live activity statement is just part of the desire to be fully transparent.  If you can see how the score goes up or down and what drives that action, then I think you will have much more confidence in your score and the platform.

Kred also publishes the full set of rules, points, curves etc on our Kred Rules page.  Does your preferred influence platform do this?  Kred has had this page live since launch and it is updated when new networks are added to the platform.

As a company Kred has a fully transparent approach.  They try and answer every tweet to @kred and when I was CEO you could find me responding directly to tweets, DMs and also making myself available for interviews with bloggers and the press.  If you’d like to interview me for an article or post, my direct contact details are at grill.im


3. Community focus – other platforms look at “topics”, and I’ve heard anecdotally of people being told they are influential in “cheese” or “prison”. In fact I have been influential in “Thomas Power” for over a year now.  These topics can also be bombed – making them hard to believe as a reliable indication of what area you are influential in.

Last time I looked, humans form communities, not topics. As such Kred took the approach to look for communities of interest, based on your biography, hashtags and tweets. Those that say they are mad about classic cars probably belong in a classic car community.

Having developed these communities (and we can further refine these for brands based on market segments, demographics and location), Kred then looks at where you have influence.

A quick peek at my Kredentials shows which communities I influence.  As you click on each of these communities, you will see my scores change.  Clearly I will have a different level of influence in different communities.

4. Dual score – this is probably the most visible difference between Kred and the other platforms. 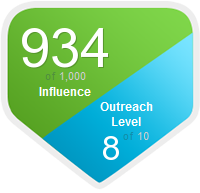 Kred Influence is the measure of what others do because of you. Your Influence score increases when someone takes an action because of your content on Twitter or any other network you have connected to your Kred profile.  This number is normalised out of 1,000.

Kred Outreach is the measure of your generosity. Outreach increases when you retweet, @reply, or follow a new person.

As you accumulate outreach Points, you move to a higher outreach level. Since outreach points are a reward for being active and benevolent, your Outreach level will never go down.

Other platforms have a single score (generally out of 100).  Clearly the higher the number the “better”, however with a single score, and not being able to see how it was developed (were there lots of spammy tweets that raised the score – no idea?) and how it moves up or down it becomes harder to understand if the score is meaningful and relevant to you as an individual and also for a brand.

As I was preparing this post (in June 2012), I noticed my other influence score dropped over the weekend from around 56 to 24. The historical view shows I’ve always had a score of 24 – strange??  UPDATE: 4 hours later I am back to 56. Perhaps some influencer turbulence?

So I can’t honestly tell you much about a single influence score out of 100. Brands need to be wary of the single score and not rely on it as the only metric to reward key influencers.

If I give someone a mobile phone for example because they have a “high” score, however on deeper examination I see that their main area of influence has nothing to do with my marketing objectives then I’m going to be pretty annoyed.

With the Kred dual score, and community scores, not only can I instantly see their influence AND outreach (measure of generosity and likelihood that they will share content, RT people etc), I can see where they really have influence rather than just hoping for the best.

Kred worked with a large global brand was sponsoring a major sporting event in the UK.

We used tightly defined Kred communities to find those that might be interested in the sporting event, then ranked them by Kred outreach score.

In working directly with the brand’s sponsorship agency (part of being transparent is we share the influencer lists), we saw a direct correlation between the outreach score and the likelihood that the influencer would be interested in attending the sporting event and talking about it.

Kred Outreach scores of between 8-10 and above saw very positive feedback when contacted.  A Kred outreach score of below 5 showed there was a low likelihood that they would be interested in talking about the experience.

This is a really useful way of determining a person’s real influence and likelihood they will talk about the brand within their community.

What does this all mean?

As the CEO of Kred, naturally when I wrote this blog post I was pushing our approach. The questions you should be asking when looking at any influencer platform from an individual or brand perspective include:

Your comments as always are welcome. As I have been saying for some time, the Kred score should play a key part in finding and understanding influencers, importantly it should not be the only thing you use in an influencer marketing campaign.

As someone who wants the influencer marketing industry to grow, I feel it is my duty to alert end users that they should go beyond a single number when using influencer platforms.  Brands who just rely on a single number to reward influencers may be in for a rude shock!

In the meantime head to http://kred.com – sign up for free and see if Kred makes more sense to you than what you are using at the moment to measure influence.