Have a look at the picture below. It is a celebrity (must be) holding a bottle of Champagne. Just in case you don’t know it is a celebrity, they have printed her name at the bottom right of the page (click for larger view).

How much did Moët & Chandon pay to have Scarlett Johansson promote their product? Probably 7 figures.

So then why does Moët have to print her name if she is a celebrity?

I also spied a large picture of another well known “celebrity” (initials K K) on the side of a building in Union Square in San Francisco.

Prominently displayed also was her name just in case we were not sure.

Is the age of the celebrity endorsement over?

Recently a client shared their frustration that they had become tired of paying for celebrity endorsements.

They had also started to grow tired of paying $5,000 sums to “paid bloggers” just so they might write nice things about them.

Separately, someone I spoke with recently involved with one of the most popular celebrities on the planet called her “a nightmare to work with”.

In many ways, some popular bloggers have become just the same as celebrities (and are treated as such by brands).

What my client pleaded with me was “Andrew, help us find normal people“. By this, my client meant that they wanted to find people who were not celebrities or paid bloggers, but instead those with a passion and an audience in a particular community that people look up to.

A perfect example is to understand who influences me.

Recently I was speaking with well known (and normal person) Neville Hobson aka @jangles.

Neville is not a celebrity. He does some advisory work for brands which he always disclaims, and does not receive payment “just to write nice things”. He also is a well-known blogger.

He speaks his mind when it comes to new technologies and platforms and his opinion is respected.

Recently when I was speaking to Neville, he was talking about the new product to come from Connectify (I am already a fan and a pro user) called Dispatch.

Dispatch has not been released yet, and they are using the Kickstarter platform to crowdfund their development.

Because of Neville’s recommendation, I decided to pledge $65 towards Dispatch.

In this case, Neville directly influenced my purchase decision.


Why I use my network and no longer look at ads

Back in 2009, Acision and Ogilvy released a paper titled “mobile advertising – 2020 vision”. While the title suggests a focus on mobile advertising, the insights in the paper are actually relevant to all forms of advertising.

One of the key themes that piqued my interest back in 2009 was the notion of peer advocacy.

Companies are missing a trick if they see social media as just “another platform” to advertise on.

What companies need to understand is how to build advocates and fans and get their product into the consumer’s consideration set much earlier.

In the paper, they argued that the old marketing funnel of awareness > familiarity > consideration > purchase > loyalty as depicted below:

has now been replaced by the “loyalty loop” (image from the McKinsey paper). 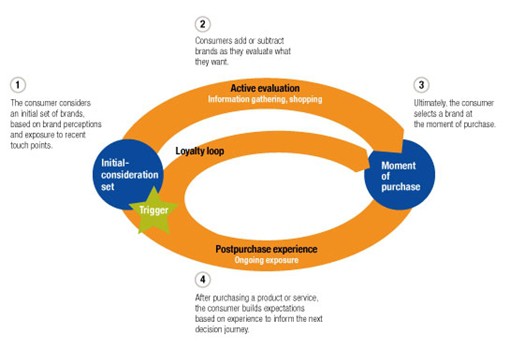 Importantly, the outer loop from consideration > evaluate is now heavily influenced by social media as consumers turn to their network (not ads) to make purchase decisions.

As mentioned above, I no longer look at ads. Instead, I used my trusted (social media and real) networks to research and evaluate purchases.

In fact, the more “painful” the purchase – such as health insurance, new car, new house, new bank then I want to hear from someone that has actually gone through the process and will still recommend the product or service.

Influencers risk their own brand each time they make a recommendation

As I explained at a talk in London recently, key influencers also need to consider their brand when making a recommendation.

Case in point – I regularly recommend Vodafone in the UK.

Each time I do this, I’m putting my own brand at risk if I recommend Vodafone and you decide to join them and they screw up. You will blame me in some way for suggesting you use their services. For this reason, respected influencers will only recommend brands that they use and trust on a daily basis.

I would argue that a celebrity or paid blogger may not always be the right person to recommend such a product as it unlikely that they would have gone through the normal channels to purchase the product [read it gets sent to them directly for free] to be able to accurately and authentically recommend it.

Just as in the case of Neville recommending Dispatch to me, we will see more and more of this happening, with “local rock-stars of influence” having the real sway in purchase decisions.

Time to redeploy some of those 6 and 7-figure celebrity endorsement budgets to real influencer marketing?