Way back in May 2007, I joined Twitter.  Back then I had no idea what I would be doing with/on this new network, but as an early adopter decided to give it a go.

In short, I like to be the first to try new things.

So I’ve signed up to app.net – you can follow me via alpha.app.net/andrewgrill

Upon signing up, those who I first met in 2007 were there also – @documentally, @ilicco, @edent, @janole – the usual crowd of early adopters. 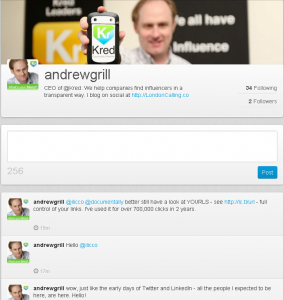