Over the Christmas break, I finally managed to get through one of the many books I have been meaning to read for a while.

Brand Anarchy, authored by Stephen Waddington (@wadds) and Steve Earl (@mynameisearl) takes a close look at how the worlds of social media and PR are colliding.

Stephen and Steve know a lot about PR, having been PRs for many years, as well as journalists before that, and most recently ran London PR firm Speed Communications.  In short, they know PR from the sides of the media, and the PR profession.

They have both been experimenting with Social Media since it started getting interesting in 2008 and I feel they are extremely well qualified to be telling other PRs about what is happening and how to prepare for the changes brought about by social media.

Full disclosure:  I employed Stephen’s PR firm back in 2008 when I was involved in mobile advertising, and we’ve been firm friends ever since.

I also get a mention in the book, and I am quoted about the notion of social CRM, when companies will use the rich information provided by social media to understand when one of their customers is talking about them.

The book is particularly useful for “old school” as well as new PRs, as it is written in a style that public relations professionals will understand and relate to.

They have also managed to include interviews from some heavy hitters such as  Alastair Campbell (Tony Blair’s spin doctor), Greg Dyke (ex BBC and ITV), and Seth Godin.

I love Seth’s quote at the start of chapter 4: “You can’t control reputation. You can only earn it.”

The working title was actually something more direct than “Brand Anarchy” – as this exclusive shot below shows (redaction added by me). 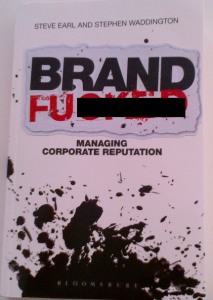 The premise of the book is that brands no longer have control over how they are perceived.   The internet, and then social media has made it simple to provide instant feedback not only to a brand, but also to all of their customers and potential customers.

This is something I experienced first-hand in November 2012 and blogged about my dealings with EE.  Stephen has asked me to contribute this story to his next book.

I get the feeling that the book also came out of necessity, as the Authors felt that many PRs thought the threat brought about by social media would just die down, and things would go back to normal.

Indeed I remember a curt exchange via Twitter with a well-known PR some years ago when I suggested that PR would look very different in 5 years. The final tweet was simply “..whatever”.

Brand Anarchy goes beyond the impacts of social media on PR, it gets to the very heart of the matter. Communications has changed forever.

Social media has facilitated a two-way exchange with brands.  Many brands are still living in the 1-way PR managed world.

In the final – and in my mind the most important chapter of the book, the authors discuss “reskilling for the future”.  Here they look at a range of emerging trends and pair these with the new skills required to meet these challenges.

Indeed, the book should be a wake-up call to any industry with customers. It is anarchy out there as consumers have now found a voice and are fighting back.  Only those smart communications professionals can keep up and adapt to the disruption brought by social media.

The book gets 5 stars from me and you can grab a copy of Brand Anarchy on Amazon.