Any business must learn to deal with negative feedback. It is a fact of life that just as not everyone may like you as a person, people may not like your brand or product for one reason or another.

Over my career I have been fortunate to be trusted as the brand ambassador and public face of around 6 different companies.

I remember my media training back at Telstra in 1999 that helped me prepare for a life of being questioned by journalists and analysts.

Throw in social media, and now anyone can be a critic. The “rules” of social are somewhat different in that there is no code of ethics, no editor to review what is being said. As a result, it can be pretty raw and candid at times.

Having been the CEO of Kred from 2011 – 2013, it brought me into contact on a daily basis with people who do not necessarily agree with the notion of social scoring, or even how we score.

My style has always been to be open and honest when commenting publicly on any company I represent, while of course keeping the interests of the company at heart.

I have been humbled by comments over the years that I seem to be very approachable on social media, and would like to set an example for CEOs that “get digital”.

As you can see on another blog post, the feedback was pretty positive.

Late in the afternoon London time, I started to sense that there was an issue in that some people thought we had just sent emails to everyone saying they were in the top 1% – as some sort of PR stunt.

Of course nothing could be further from the truth.

A post on Google Plus started the chatter – and ironically those people that were talking about the issue were in the top 1% of Kred users and received the email, and by this very nature were the most connected and influential 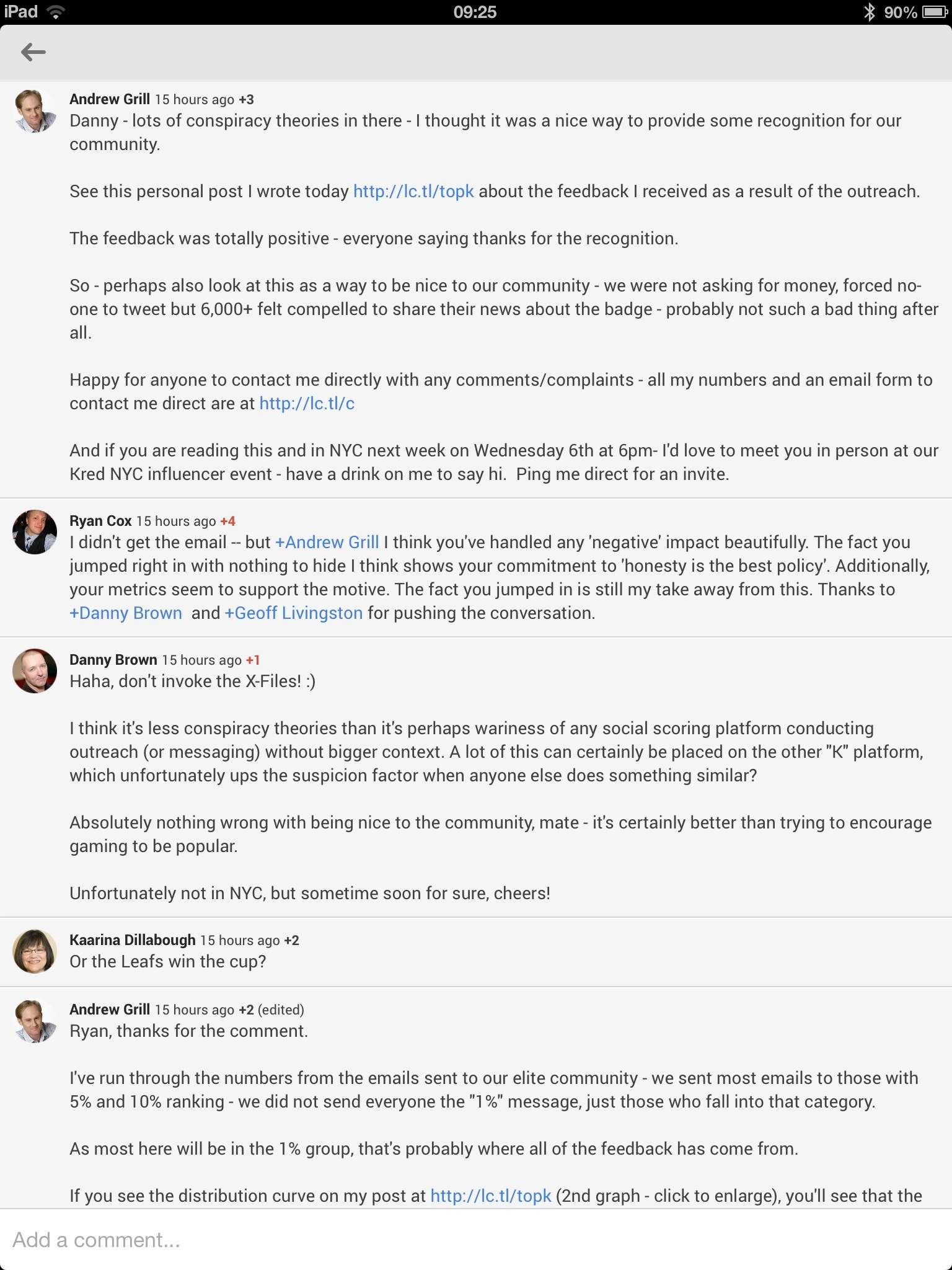 They smelled a rat. The conspiracy theories started.

So as a socially aware and connected CEO, I started to engage with the commenters.

I addressed their concerns, shared facts, took on and acknowledged feedback.

And what happened next was what I have seen time and time again when you are open.

There was no need to keep discussing the topic. Just as when you go to the front desk of a hotel to complain and they say “Mr Grill we are so sorry, I would feel the same way, let me make it right for you immediately”. As a result, you feel your issues have been addressed, and you have no further need to complain.

In the case of the G+ post, the community of those interacting decided to call time.

If you read the thread, Ryan Cox steps in and basically says “no more need to discuss this chaps”.

I’ve also received other feedback that this was well handled – I appreciate this.

The lesson here is that you WILL get negative feedback about your company. Embrace this, listen to it, learn from it and respond in a professional and engaging way.