With the news that the UK’s largest music retailer HMV is to go into administration, hot on the heels of photography retailer Jess ops, the stark reality is that digital disruption is starting to bite faster than perhaps even the experts expected.

Some months ago, I reviewed an excellent report by Deloitte in Australia (ironically their UK arm is HMV’s administrator) titled “Digital Disruption – Short Fuse, Big Bang?”. This report looked at the Australian market – but I believe it also applies to the UK and US.

Deloitte also tweeted a link back to this post.

In the figure below, the industries most at risk of the “short fuse, big bang” effect of digital disruption include retail trade, ICT and media and finance. 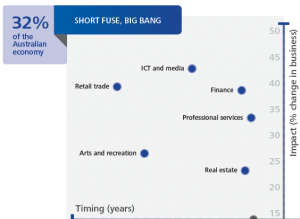 I don’t even think the smart people at Deloittes would have predicted two large high street retail chains could collapse so quickly.

Is it just the UK economy or something more?

You could argue that the state of the UK economy has hastened the demise, but let’s look at the two businesses in more detail, and how they have been victims of digital disruption.

Digital Disruption: More people are taking photos on their camera phones and uploading to Facebook, and Instagram rather than printing them out

Effect: people don’t buy as many digital cameras, and don’t print their photos out anymore. Keeping hundreds of physical stores with stock and expensive photo printing machines does not make sense.

Digital Disruption: people are streaming music via Spotify, buying on Amazon cheaper than in-store, and watching movies from iTunes or LoveFilm/Netflix online.

In the UK apparently 73.4% of music and film are downloaded or bought online, and HMV’s share of the combined music and video market, including physical and downloaded products bought on and offline, was 22.2% in 2012, according to Verdict Research.

I’m watching book chain Waterstones closely, as they are making all the self-denial noises that HMV did days before they went into administration.

The demise of HMV and Jessops should be a wake-up call to ANY business that has been relying on old business models and are yet to adapt to the new digital future.

Had HMV and Jessops been more forward thinking 12-24 months ago, they could have re-engineered their business to become a social business and survived.