UPDATE: 30 December 2013 – TechCrunch reports that France is bringing in legislation from 1st January forcing taxi industry disruptors such as LeCab and Uber to wait 15 minutes to pick up passengers.

This shows how digital disruption is hitting the French taxi industry. What amazes me is that a Government would instead legislate an for an inferior level of customer service, rather than take a cue from new entrants such as LeCab and Uber and fund innovation to provide a better service.

The reason that Uber, Lyft (profiled below) and others have emerged and are taking market share is because the existing industry is broken.  You will find that industries and business models get disrupted by smarter entrants when the existing ways no longer work for consumers.

Regular readers of London Calling will note how I love writing about digital disruption.

I witnessed it happening first hand in the taxi industry on a recent trip to San Francisco.

Mid-morning last Thursday, the team needed to get to a meeting at Google, across town in the financial district.

Waiting on the busy intersection of Third & Bryant street, we were unable to hail a cab after waiting for nearly 10 minutes – they were either full or not interested in picking us up.

My colleague turned to her cellphone and said “I’ll get a lift”.

What she actually meant was that she was getting a Lyft car to come and pick us up.

Within 3 minutes, we were all inside the Lyft car, and with a welcoming fistbump (the Lyft way of saying hello), we were on our way in no time.

At the end of the journey, the transaction was processed automatically and no cash changed hands.

Lyft is not a taxi service, they instead call themselves a “ride sharing” service.

Their members have a distinctive pink moustache placed on the front of their car so you can recognise them, and you can track the progress of the car on your phone – how modern! 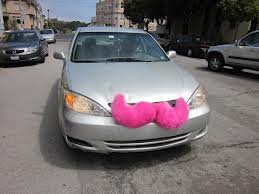 Lyft is not the only service out there giving the established taxi operators a run for their money – Uber is available in London and even Sydney.

The difference between the existing taxi services and these new upstarts in the user experience.

In many cases, the challenger services have a real-time app that allows you to see where your car is and information about the driver, and also pay by credit card through the app. 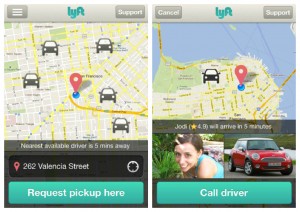 The traditional services such as Black Cabs in London, Yellow cabs in San Francisco and Taxis combined in Sydney have all been slow to adapt to new technologies.

While there always seems to be a black cab nearby in London, very few of them take credit cards, and if they do, more often than not the driver lies about the machine not working.

For years now I have been using the alternative – Addison Lee who have a sophisticated online presence and app – they even text you the registration number and driver’s mobile phone number when you book.

Hailo is another service that actually works with London’s 23,000 black cabs, however it seems that the London cabbies are wedded to the old way of doing things.

Today I saw 3 black cabs waiting at a cab rank in London outside a hotel.  I watched to see how long they waited there before they secured a fare.

For between 5 and 20 minutes, these cabs were idle, with no fares.  If they had used an app like Hailo, then they would have probably had a local fare in no time. 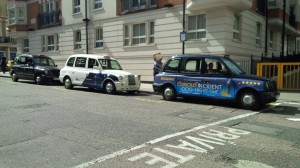 Any management consultant will tell you that it’s all about utilisation of your assets.

The reasons that planes don’t sit on the ground for more than 45 minutes or so is that when they are on the ground they are not making money. The same can be said for taxis. When sitting idly at a rank, they don’t make money until the next ride commences.

The Taxi industry is not alone

In every industry, disruption is taking place. It happens when technology is used to make the process more efficient or benefits the customer.

The simple innovation of knowing where your taxi is, and the registration plate massively benefits the customer.

In contrast, the Cabcharge payment system in Australia takes 10% of every transaction involving credit cards. If you want to pay by credit card you have no alternative in an Australian cab – Cabcharge has the monopoly on taxi payment processing.

The industry has said that this figure is more than 10 times what it actually costs to process the transaction – so what is Cabcharge doing with the balance of the fee?

They are certainly not investing it in technology, otherwise firms such as Uber, and new Australian start-up goCatch would not exist.

Proof that these new models are disrupting the status quo

Uber and Lyft have had numerous run-ins with local taxi companies and regulators in Los Angeles and New York and have been issued with cease-and-desist letters. No doubt these old-school monopolies fear their lunch is about to be well and truly eaten and are lobbying the regulators very hard.

These existing companies should  be scared. Simple technical innovations around mobile apps mean not only benefits for consumers, but for the drivers as well.

What is happening in LA and New York with Uber, Lyft and others proves that the existing regulation cannot keep pace with technical change and the ensuing digital disruption.

The arguments being thrown at the newcomers include the fact that the drivers are not licensed, have no insurance and that proper background checks have not been conducted.

The reason these upstarts are bypassing regulation merely points to the fact that the existing laws do not provide enough flexibility in a disrupted environment.

Let’s assume that these new companies will quickly solve these issues to the satisfaction of the various transportation regulators.

Most already vet drivers personally and also have their licence and taxi cards on file.

Even with the existing checks in place with old-school taxi companies, I often feel like I am putting my life in the hands of a wannabee formula 1 driver each time I get into a new taxi at the airport.

At least with services such as Lyft, and Uber, I can see a picture of the driver, their name and even a community rating before they pull up at the kerb – arguably providing me with more comfort about the suitability of my driver than just a yellow car with a sign in the roof.

What remains is that while these companies may be treated and regulated in a similar way to the big guys in the short term, they are much further ahead of the incumbent dinosaurs when it comes to technical innovation.

If the existing players do not invest the windfall provided while running a monopoly (I’m looking at you Cabcharge and your 10% “fee”), then they will be seriously left behind when the nimbler competitors convince government regulators that the ridesharing model can and does work, and benefits consumers with a more cost effective and convenient solution.

Disruption exists because an existing business model is inefficient and outdated. The existing taxi models worldwide are about to get completely disrupted – government regulation notwithstanding.