Many readers will have seen the video of Transformers Director Michael Bay fluff his lines on stage at CES in Las Vegas and literally “exit stage right”.

In his own words …

“Wow! I just embarrassed myself at CES – I was about to speak for Samsung for this awesome Curved 105-inch UHD TV. I rarely lend my name to any products, but this one is just stellar. I got so excited to talk, that I skipped over the Exec VP’s intro line and then the teleprompter got lost. Then the prompter went up and down – then I walked off. I guess live shows aren’t my thing.”

You can see the painful 1 minute video below.

Those reading this post that present for a living will know that from time to time, things go wrong on stage. Projectors and microphones fail, and sometimes even crazier things happen.

One of my most memorable moments was at the Dialog conference in Sweden in 2012, I actually fell off the stage while presenting, and mid-sentence recovered, jumped back on stage and kept going.

Kred made a good case for their capabilities v. Klout. Even the alacrity of @andrewgrill after falling off the stage. #dk12

Having presented at hundreds of conferences since 1999, I have had my fair share of technical problems. My greatest fail to date was actually 10 years ago while presenting a keynote address at the Rotary District 9750 Conference in Sydney.

Below is a shot of me on stage at that conference, after the initial fail. 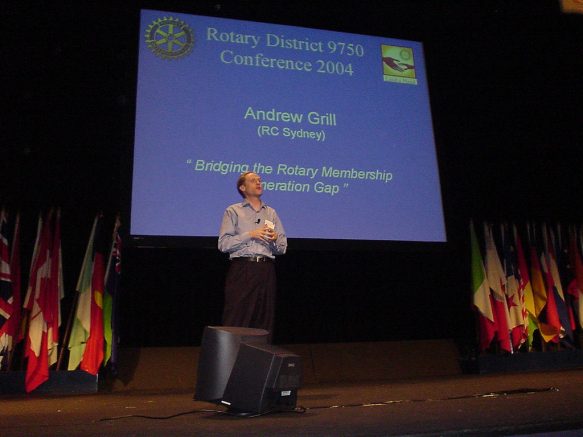 I was the first speaker on after lunch, so in the break, set up my laptop on stage, ready to present slides following a 3 minute introductory video.

What I had not realised was that in the break, my laptop had put itself to sleep [presenter rule 7 is ALWAYS turn off sleep mode on your PC when plugged in before a presentation].

As the 3 minute video was coming to an end, I walked on stage and looked across at my laptop screen. It was blank. The kind of blank look on the 250 people in the auditorium at the Sydney Convention centre were giving me when nothing appeared on the screen after the video.

So instead of walking off in a huff, what I did was signal to the AV guys we had a problem, and suggested they put some music on.

I then invited the audience to get up and stretch for a few minutes, and talk to their neighbours while I rebooted the laptop.

Once I had rebooted the laptop (and that was the longest 3 minutes of my life with 250 people and my now wife looking on anxiously), I calmly started my presentation titled “Bridging The Rotary Membership Generation Gap”.

The comments after my presentation were very generous, acknowledging that I handled the technical issue well, and the content of the presentation and my passion for the subject made them forget about it anyway.

What I was calmly thinking during the 3 minutes while the PC rebooted was that there was nothing I or the audience could do but wait, and that once I got going again, they would enjoy the content.

The lesson here for professional and aspiring presenters – the more you present, the more likelihood that things will go wrong.

If you are prepared for most scenarios, and are passionate about your subject then you can get through just about anything that happens – even falling off the stage!

Have a look at some of my previous talks on my presentations page.