With all the stories about identity theft and hacking in the news at the moment, it is time to take online security seriously – treat it as holiday project before we hit the new year.

Hands up those readers who in the last week have used a public WiFi connection, either at an airport, train station, coffee shop or hotel without realising everything they were typing was potentially at risk of being monitored and hacked?

Yes, I thought so.

Have you ever wondered why these open networks (ones with no WEP or WPA password required) are so easy to connect to?

The lack of a password means that your connection between the laptop and the free WiFi base station is completely unencrypted.

This means that anyone else on the same network or in the same area can theoretically view EVERYTHING you are doing.

A program called Firesheep has been around for a while as a Firefox extension, and this allows anyone to view the information on a computer connected to an unsecured, public WiFi connection nearby.

Last week I was in a Starbucks and looked across at the person next to me on their laptop, and they were on an online banking website. 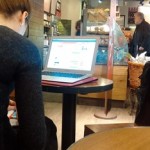 Had I been a less trustful person, armed with the right tools, I could have been viewing her screen as if I was sitting in front of it.

Since 2009, when I first became aware of how much of a risk these open WiFi networks are, I have been using a Virtual Private Network (VPN for short) that encrypts everything in a highly secure “VPN tunnel” right back to the internet.

News also that German researchers have worked out how to hack into previously secure mobile signals means that I run my VPN on my iPad and mobile even when connected to a 3G or 4G network.

I strongly advise you to invest in a VPN for 2018. For the last few years, I have been using VyprVPN. The reasons why I swapped from a competitor can be read here.

Grab the details and a 3 day free trial here. Don’t let 2018 be the year you got hacked.

While you’re reading this, make sure you enable two factor authentication on all your accounts – read my blog post on how and why.

They have apps for almost every platform, and also have detailed instructions for those that want to run without the apps (eg I run OpenVPN on my iPad rather than IPSec that is offered in the app).

Why not make the holiday break a time to rethink your online security for 2018 and avoid getting hacked.