This piece first appeared on the ANZ Bank’s BlueNotes thought leadership blog where I am a regular contributor.

Many companies employ people who are truly eminent and respected in their field – but nobody else knows about them.  A formal eminence program can help identify and amplify these people for mutual benefit.

In previous BlueNotes posts, I tackled the need for more digital diversity on boards, as well as highlighting the “social ambassadors under your nose”.

I want to talk about the notion of eminence and how you can find and harness this trait in your own employees and promote it more broadly for mutual effect.

“Eminence”, as defined by oxforddictionaries.com is: “Fame or acknowledged superiority within a particular sphere”

Several years ago, all clients wanted to know when I spoke to them about digital and social was “how (or why) do we get on social media?”

Now the constant theme is about ‘eminence’ – how do we find our eminent people? How can we promote them? And in turn promote our business?

Companies are warming to the notion their own people are some of their best assets – if only the rest of the world knew about them!

Clients tell me “we have hundreds of really smart people but the market does not know about them – how do we get this message out?”

What better way than using your own people to authentically promote your own products and services. The company benefits, and the individual benefits also – and this adds to their ‘eminence currency’ in the market.

With the rise of social media platforms now starting to challenge existing media as a way of getting a message across, no longer do businesses need to wait for a journalist to interview key people – we can provide this promotion ourselves.

There is a fine line though between just using your people to promote your own company and nurturing someone with real expertise and a point of view in the public eye.

Those who have a sense of their own personal brand will not want people to think they have just become a mouthpiece for their company.

When I speak to clients around the world, I ask them what they did when they were given my name as someone coming to meet with them.

A formal eminence program can help to amplify this.  The true value of elevating your eminent people to a wider audience should not be underestimated.

The reason why a number of my clients are now asking me about eminence is because their competitors are deploying this strategy for best effect.

Just take a look at the website and Twitter feeds of some of the world’s most-respected companies selling services and you can see they promote their own eminent people as a way to see deeper inside the firm.

In a people business such as consulting or professional services, people deal with people, so in this hyper-connected, always-on world, you need to be prepared to put your people out there alongside your brand – because for many companies, your people are your brand.

This is especially true in the professional services world, where eminence holds a real currency.  Why hire the seventh-most eminent person on a particular topic when you can have number one?

For those employees who are not well known outside the company and want to work on increasing their eminence, the best place to start is inside the company.

When I joined IBM back in 2013, the best piece of advice I received was I had to grow my own network (and hence my eminence) inside the company. In an organisation of 400,000 people, how can you hope to have any recognition, let alone eminence if people don’t know who you are?

My lucky break at IBM came just a few weeks after I started. One of my mentors asked me to be a keynote speaker at an internal event where there were over 700 IBMers.

Instantly, 700 people knew who I was, what I did and how I could help them. Nearly three years later, people still remark they know me as a result of hearing me speak at that event.

My internal eminence means other teams know how I can help them and their clients. Indeed many of my global client assignments have been as a result of someone recommending me internally.

My advice to those who would like to increase their eminence would be to start inside the company and then look at techniques to broaden this outside, in the public sphere.

Many companies these days use internal social networks such as IBM Connections, Yammer, Chatter or Slack.

Employees can promote their expertise and hence increase their eminence by regularly providing insights and points of view on their area of expertise.  Internal social networks also provide a ‘safe’ environment to practice how content might be received on public social networks.

IT’S NOT JUST WHO YOU KNOW ANYMORE

I think eminence can be summed up in this quote from networking expert Kelly Hoey:

In this day and age, it’s what you are known for and who passes this on via multiple networks that drives real eminence.

The most effective way to drive your eminence is of course to combine offline techniques with online.  Offline could involve public speaking engagements (which cross over to online as people tweet about the great things you are saying) or TV and radio appearances that seek your expertise on a certain topic.  Online tools such as social media, blogs, forums and increasingly video can also be used to promote and enhance your eminence and expertise.

I am fortunate to be asked to speak at a range of events around the world, both public events and conferences, as well as client events and internally at IBM. 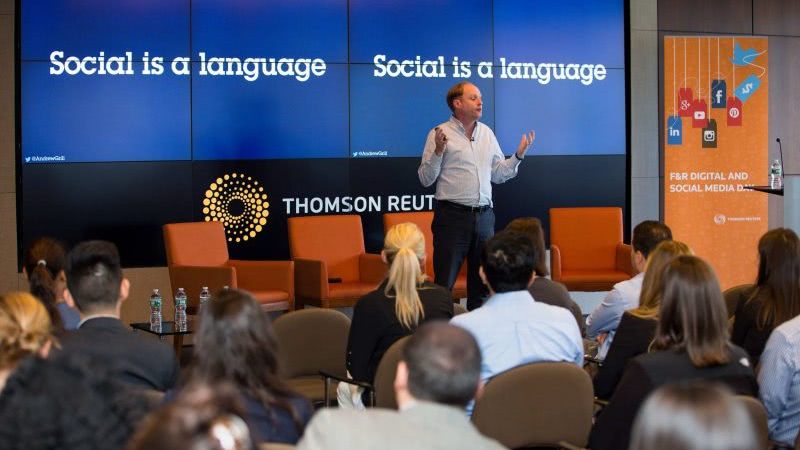 Photo Credit: Matt Greenslade. Taken at the Thomson Reuter’s Social Media day in New York June 2016 where I was invited to present a keynote.

Interestingly, most of my speaking invitations have come from people watching my first TEDx talk delivered more than two years ago in London. In the talk, which can be viewed below I explain the “social serendipity” that led me to be invited to speak

As a result of this talk, I have been able to share my expertise around the world to thousands of people, and in turn increased my global eminence around the topics of social business and digital transformation.

This has directly lead to client engagements (and hence revenue for IBM) as I have been asked by name to present to clients as a result of this online visibility. I have also been asked by multiple teams at IBM to train them on how to become more eminent, delivering many masterclasses on this topic.

Indeed the fact you are reading this opinion piece on BlueNotes is a perfect example of eminence in action.

In 2015, I was fortunate to be introduced to the head of Corporate Communications at ANZ, Paul Edwards and the editor of BlueNotes Andrew Cornell.

They were already aware of my eminence in the social business and digital space as a result of my online activity and invited me to become a contributor.  My colleagues at IBM were pleased but also asked “how did you manage that?”.

WHAT CAN YOUR COMPANY DO?

Hopefully by now you are sold on the idea that eminence can be good for your brand and the bottom line. So what can you do next? The hardest part you may find, even with all of the knowledge, is how do you put this into practice.

“I don’t have the time” is a response I hear from many people who have real expertise, a point of view and something really interesting to say. When I explain the financial benefits of my personal eminence to IBM in being able to attract new opportunities, and open new doors for our sales teams, the tune often changes.

5 tips to get started on an eminence program

What are your thoughts? Do you have plans for a formal eminence program, or are you running one already? Leave a comment below or tweet me @AndrewGrill