This article first appeared on the Changeboard blog where Andrew is a regular contributor.

Does your organisation use social media in the hope a CEO may read your tweet and want them to buy your product? You don’t always have to aim so high, writes Andrew Grill. Often we need only influence the influencers for maximum effect.

Social Selling without having to “sell”

Have you heard this before in your office – “Let’s tweet the CEO of [insert big company name here]! If they see our tweet they will want to buy our product”.

The term “social selling” has been used for some time now and it looks at the way sales people can reach buyers using social media.

There are many books and courses that teach social selling, and some traditional salespeople have really picked up on how to sell via this channel well, others, however are still seeing social as yet another broadcast channel, and treating it as such

Adding value to what you say 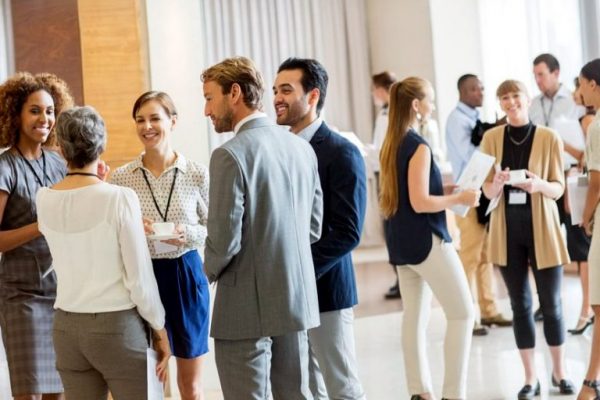 Imagine you are at a conference. It is the networking break and you spot someone you haven’t seen for a while. The two of you start catching up over a coffee then someone you both don’t know comes up to you. Conference etiquette is that the “unknown” person waits for a gap in the conversation for a suitable break when they can join, when they can add value to something that you are talking about.

An alternative version is that someone comes up to both of you and thrusts a business card into your hands and yells the name of their company at you, saying “buy my product”. You can’t help but stop to acknowledge the stranger.

This is called advertising.

We accept these interruptions on many of the mediums we use because we have become used to it.

Social media is different though. Just as you can’t walk up and yell out an advertisement for your company to conference delegates in the middle of a conversation, you can’t do this on social media either. You have to have something of value to exchange.

I use the conference example on stage at my keynote talks and it gets people thinking, that yes social media is indeed different and must be treated in a different way.

Selling in the past via the telephone or email has always been a fine art. So how can you get to a decision maker and bypass their team or personal assistants put in the way to block your marketing messages being received?

In the age of social, many traditional sellers have assumed that they can just “tweet the CEO” in the hope they will bypass the usual people blocking them for their message to be heard.

The issue is though that many of the buyers are not on social media, or don’t use it in a way that is effective for cold calling.

Getting to the Influencers

My tenure before IBM as CEO of online influencer platform Kred taught me a lot not just about the business of influence, but also about the psychology of influencers.

People who say that they are influential simply aren’t. Influence is earned. It is bestowed on you by others. In the business world, influencers come in many forms.

[bctt tweet=”People who say they are influential simply aren’t. Influence is earned.” url=”http://dgital.link/influencers”]

The Chief Executive’s personal assistant, chief of staff or strategy director can be some of the most influential people you will never meet.

They can become the eyes and ears of the CEO to make recommendations. I can remember a time when I was that person. Working for the Managing Director of Telstra’s Business Solutions Group in Australia, my boss would often arrive at work and ask me “so Andrew, what’s the latest new technology we should be looking at – what companies are hot?”.

In a 2014 Social buying report from IDC that I reviewed extensively saw that 84%, of C-level and VP-level buyers use social media for making purchasing decisions.  This proves my theory that social media is being used at the top levels of business to gather recommendations before making a buying decision. It is not always done in a visible or accessible way, and it is for this reason that you need to develop a strategy to influence these decisions.

This is a true story. Back in 2014, I was waiting to have my haircut at my local hairdresser. I had just “checked-in” to the salon via social media location app Foursquare. This network allows other trusted people to know where you are.

Shortly after, my phone rang. It was the head of digital transformation for a large airline group. We had met at the South by Southwest festival in Austin a few months prior and followed each other on social media.

“You don’t need a haircut,” he said. Baffled and looking around to see if he was nearby, he told me he’d seen I was getting my haircut via Foursquare and that I was in London after weeks of travel.

“Will you be in London next Tuesday?”, He asked. I replied yes and what happened next was amazing.

“That’s great. Would you like to come to dinner with the CEOs of some of the largest airlines in Europe and chat about digital? Our shout at a 5-star restaurant, Chef’s Table.”

As you expect, I went to that dinner. Afterwards, I looked back to see how this had happened.

I asked him why he picked me to help influence the influencers. He told me it was a few reasons. Firstly he could easily contact me and find out my availability, and secondly, he knew of my body of work and expertise and that it would be of great interest to his CEOs via my social channels and interactions.

While this may be seen as the gold-standard of “social selling”, others may have different experiences but the principles are the same no matter where you try and influence via social channels.

Social selling is a new way of working, and so requires a different mindset, a different type of talent and a different business strategy.