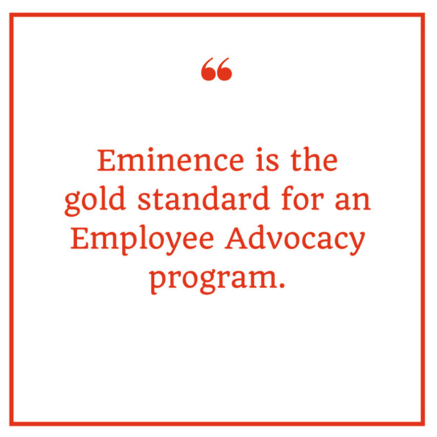 The team at Smarp chatted with Digital Eminence Practitioner and social business thought leader Andrew Grill about how social media has been around for thousands of years, how companies approach Employee Advocacy and how they can make use of their most eminent employees.

This post originally appeared on the Smarp blog as Influencer Insights, Part 8.

See also my post providing some practical tips around eminence Employee Advocacy beyond “please RT this” and the rise of Digital Eminence.

It was also debated on a LinkedIn thread from the team at Deloitte, and won the lunch for the best answer! 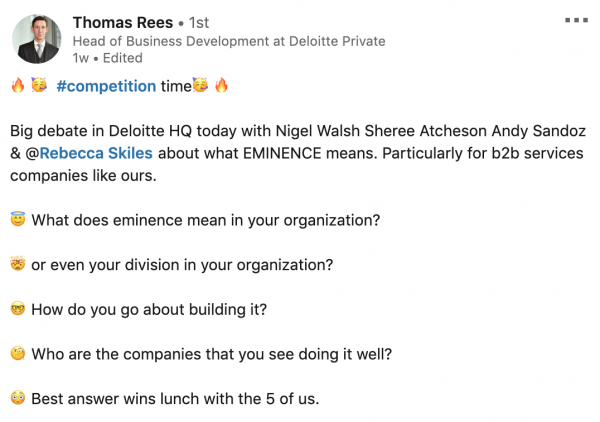 At IBM, Grill ran IBM’s Social Consulting practice whose mission is to encourage companies to better utilise their internal social media networks and develop their internal advocates to help promote the company externally. Prior to IBM, he was CEO of social media influencer Kred and he has been involved with social media for more than 12 years.

You have mentioned that once you post something on social media, you never know what will happen next. Do you think that the benefits of being active on social media outweigh the risks?

I’ve talked about the concept of social serendipity for some time now, which is about ensuring you’re at the right place at the right time, using social. In 2011 I sent one tweet that literally said “arrived San Francisco”, not knowing what would happen next. Because I have been using social media in a business context for some time, coupled with my experience while CEO of social media influencer platform Kred, I was fully aware of the potential of that one tweet.

Indirectly, that one tweet led to being offered my role at IBM two years later. My theory is that brands today are treating social like every other communications channel such as TV or radio, and they say “we’re going to dictate the terms, and we’re going to tell you what we want you to know about our product or service”. I think that the challenge here is that you need to understand the dynamics and the language of social media, and that it is truly about conversation, and not simply a communications channel. As a brand you have to have something of value to say to get into that conversation – it’s all about a value exchange when it comes to social.

Do you have any advice for companies looking to improve their social media presence?

The social journey has four parts: Listen, Learn, Engage and Integrate. When you start venturing onto social media, you need to first start by listening – understand what people saying and how we might add value (or not) in that conversation. You can learn an incredible amount by simply listening to social conversations. One of my most often tweeted slides at my keynotes simply says : “Social Media is the best piece of market research you NEVER commissioned”.

This really resonates with audiences worldwide.

Only once you have learned by listening can you engage. You also need to develop an integrated strategy for producing content that adds value and is shareable across multiple formats and channels, not just social.

You say in your TEDx talk that with the prevalence of social media, consumers have become extremely empowered, and people can influence purchase decisions. How do you think brands can leverage this change in influence in their social media presence?

Social media networks have existed since Roman times thousands of years ago, and if we fast forward to London in the 1600s there were hundreds of coffee houses that served as an early social network. In the 1950s, when mass media such as television and radio became popular, social networks started to become suppressed as advertisers sought to control the message, and I believe consumers lost some of that influence and power. With social media networks as we know them today, the power is shifting back to consumers, and brands are ultimately losing control.

As a consumer, I now feel that I have influence over brands like never before. Consumers are now realising that they are totally empowered, and brands are responding to this shift.

For some time now we have started to see the rise of the “professional influencers”, as well as traditional celebrities who hold power over brand perception that can move people to make purchasing decisions, and then there are quasi-celebrities who are becoming influential on channels like YouTube and Instagram. Brands know if they get their products into their hands they’re more likely to get the reach they need in a fragmented media landscape.

The real challenge, though, is to find quality influencers. I think what brands are clamouring for now are authentic influencers, people who have credible and demonstrated influence inside a community or organisation that actually use and love the product – these people are more likely to be classed as advocates.

According to you, Employee Advocacy has to be done in a coordinated and authentic way to not just become the “click here to retweet” model. How do you determine the authenticity of a program?

When a company asks you to share a piece of content, an employee needs to decide for themselves if they are doing this because they can add value and insight to what the company is trying to achieve through this piece of content, or is it just going to be seen as the employee promoting another piece of company-generated content. This risks the employee is seen as an extension of the company’s PR machine and will impact the value of their brand negatively.

The challenge is, how do you get employees to share content when they are also putting their personal brand at risk? Companies need to take advantage of their experienced and trained advocates and treat them the same way they treat bloggers and influencers—Simple things such as providing then an embargoed press release, or inviting them to media briefings and product launches. By providing insight and access to employees they can then add their own insights in an authentic and realistic way.

The value of an individual’s Influence increases with corresponding access to exclusive content and having an inside view that no one else has. Combined with realistic company guidelines on the use of social media, I believe these advocates can go just beyond the “click to retweet” employee advocacy programs and become incredibly powerful, respected and authentic communicators. Not everyone wants to do this however, and there is still a case for the more so called “mass market” employee advocacy program.

When a company starts looking at developing an Employee Advocacy program, how do they select the people who take part? Should they even select them or should it be open to everyone?

The issue for any advocate program is that of measurement. To do this requires people and funds because you have to have reliable measurements and metrics in place. If someone asks what’s the return on investment, this can be calculated by looking at existing metrics, such as revenue lift, pipeline value and deal conversion in a B2B environment.

Some advocates are self-selecting. Take myself as an example. One reason IBM chose to employ me was because of my experience in social media and online platforms. I am very visible on social and identify that I am an IBMer so people like myself are an obvious choice for an advocate program.

You mentioned that social advocacy and social groups have been around since Roman times. In a way, EA is nothing new, people having talking about their work for thousands of years. What do you think is the main change now with social media?

The power of advocacy is using social as a broadcast channel. With social, you have a radio channel, a TV channel and a newspaper that’s tuned to channel You. Before social media, if I wanted to get my message out, I had no broadcast channel of my own. I think with the advent of social, anyone can now become a broadcaster and they have a multitude of channels to do so through networks such as Facebook, LinkedIn, Twitter, with little advertising. It has turned communication on its head.

How do you define influence on social media and can anyone become an influencer?

Everyone has influence in their own area. If you look at before social media became popular, I could go and give a talk at a Rotary Club, and be passionate about a topic and influence the people around me. You can have influence in a particular community, but I think the notion of just giving someone an influencer “score” is wrong. Everyone can have influence but it’s micro-influence on community level that is the real power, because to become an influencer you have to be known for something rather than everything.

I have found that as my career has changed, my influence areas have also changed over the years. 5-10 years ago I would have been more influential in London in mobile advertising. I would say that’s definitely not the case now, I’m more known for things like social and digital transformation and eminence.

Eminence is the gold standard an Employee Advocacy program. These are not people that sit on social media every day and tweet or get paid thousands of dollars to promote products. These are people that are known in their field because they’re really smart and completely versed in their topic. Their peers recognise this and their expertise is sought at all levels. An eminent person uses social media but doesn’t rely on it to drive their eminence.

I believe there are four parts to real eminence:

1. Personal character: Are you someone who is respected?

3. Practical application: Can it be applied to practice?

4. Time: You don’t become eminent overnight. It takes a long time, because others have to bestow eminence on you as a result of your character, your body of work and how it can be applied.

When you have all these ingredients, this is the trigger to develop a communications strategy and promote this eminent person across multiple channels. This is when the hard work starts. Pushback may come from people saying they don’t have time for this, however, when they see the value exchange of the company being able to promote that extreme level of eminence, thought leadership and value that they can bring to the organisation or problem, they then understand the value that can be derived from these efforts.

The eminence value is something you can absolutely measure in terms of ROI. You might be investing tens of thousands of dollars in someone who might be delivering millions of dollars in return as a result of someone knowing that company X has this eminent person on staff.

Do you have tips for a company looking to start an Employee Advocacy program?