Read at The Drum

Recently I was asked to be the keynote speaker for a large UK company. I am often asked to be the “external” presenter – someone who can amplify a message that may have already been communicated by senior management. The fact that it comes from an outside source gives it some credibility even if it is a similar message.

The company in question had gathered their entire digital team – some 300 people from around the country – for the first time in many months.

My role was to inspire them to “become digital custodians”. In speaking to my host before the meeting, I asked him how far I could push the team. “Go as far as you think you need to” was his response.

Looking back on the talk, I was quite tough on the audience, but they needed to hear some hard digital truths, ones I will share in this and subsequent posts.

One key message I left them with was that if I came back in a few years’ time, this group would simply not exist. I wasn’t suggesting for a moment that the company would make them all redundant; instead I implored them to rapidly integrate themselves into the other parts of the company, and not stay isolated as a separate team.\

At another event, I heard about a similar digital team working at a large, well-known British company that were literally “across the road” in a different building. When I heard this, I shook my head.

Just as email, and mobile has now become pervasive in everything we do, we no longer have an “email team” and there are few “mobile teams” left in my experience.

It makes sense then that the same will happen to social and digital teams.

I’ve written before about how a separate “social team” runs the risk of simply becoming a “social switchboard”. This one team has to filter and redirect all social messages sent to the brand. In the future, social and digital teams will and must be integrated deep inside the business.

The second message I gave at the conference was inspired by a report from recruiters Korn Ferry early in 2016 titled “Leaders for a Digital Transformation”. The report talks about two types of digital leaders (and this can apply to non-leaders also): one being “born-digital” and able to clearly understand digital techniques and technologies, and the other “going-digital”.

This first “tribe” most often come from an organisation where digital is in their DNA, but are less experienced at navigating large, complex organisations.

The challenge in any organisation is to recognise both types of people, and have them work together to ensure the digital message permeates every part of an organisation.

Those born-digital types need the going-digital to get their message and mandate heard, and by working together, and often against corporate culture, much can be achieved.

Management teams and those in HR need to identify these two tribes and pair them for maximum effect.

A fantastic piece of research by Deloitte in Australia looked at those industries most at risk of a short fuse before a big digital “bang”.

Most of my clients (and those reading this) look in horror at the short fuse-big bang top left-hand quadrant – because they are in that industry or have clients there. 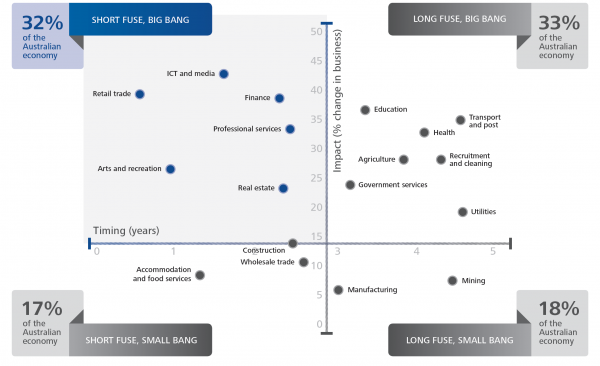 While this chart was produced in 2012 and for an Australian audience, as we end 2016 this is more relevant than ever. When I present this to audiences around the world, they receive a huge disruption wake-up call, because yes, it is happening to us also.

The obvious disruptors such as Uber, Netflix and Airbnb are oft-used examples. When we dig deeper into each of these, you see how they have disrupted themselves in their short corporate lifetimes.

Uber started as a limo-sharing app, is now disrupting taxi markets globally and is also nipping at the heels of the food delivery market with Uber Eats. Netflix pivoted from a DVD mail-only service into one that streams their own exclusive content to multiple platforms.

Finally, “Air”bnb started as a service to pair those people who had a spare air mattress with people needing a room for the night before becoming a real threat to the global hospitality industry and forcing cities to change the law around short-term renting.

In each of these examples, the disruptors disrupted themselves to stay ahead of the market.

If you are reading this and your organisation isn’t looking how to disrupt itself, then you either need to be the one to disrupt or look for a new firm that is.

Digital technologies, a mobile and technically literate workforce and an increasingly savvy customer base are demanding better ways of doing things and the old business models just aren’t built to keep up.

Running faster than the regulators

What I often see is new companies running so fast that the regulators cannot keep up. One example of the opposite is the banking industry in the UK. In 2014, the government went to the market to see what could be done to improve customer experience and drive innovation.

A very smart group of consultants came up with the “Open Banking Standards” that will force large UK banks to offer open APIs by 2018. This is a fascinating example of the regulators staying ahead of the industry to drive competition and innovation.

Recently I had the opportunity to ask a digital leader if they would have introduced something similar if not forced to by the government. “No” was the response. It literally took my breath away, and reminded me of why large organisations are struggling to keep up with their more agile digital disruptors.

My message to the audience of 300 and those reading this post is disrupt, or be disrupted.