My Father, Ron Grill wrote an excellent opinion piece for the Electronics Industry Development Adelaide (EIDA) on one of Australia’s best kept secrets – the electronics industry in Adelaide, South Australia.

A version of the article below appeared on the EIDA website in October 2018.

Mallee is an Australian aboriginal word for the region around Adelaide with its original cover of low, scrubby eucalyptus ‘Mallee‘ vegetation. Because of its geographic location and the productive and resourceful electronics industry in Adelaide, this region has been named ‘Silicon Mallee’.

To the wider community electronics typically means television sets, microwave ovens and mobile phones. These and most other ‘consumer electronics’ products are not made by the Adelaide electronics industry; they are mass-produced overseas to standard designs and in large volumes.

The Adelaide HTEI includes 300 mostly locally owned, small and medium size firms that design and produce their own products plus a small number of foreign multinational companies, concentrated in the defence electronics sector.  Products of the Adelaide HTEI are sold in all Australian States and in more than 130 other countries. Adelaide’s productive and resourceful HTEI firms employ 11,000 well-trained and well-paid engineers, scientists, technicians, production and support staff who produce $4 billion annual revenue.

Silicon Mallee punches well above its weight in Australia

$4 billion is a large number!  It is equal to the ex-factory sale price (average of $25,000 each) of all 160,000 passenger cars built in Australia in 2016.  This extraordinary revenue feat was achieved in the small and relatively isolated city of Adelaide with just 5.4% of Australia’s population. The Adelaide HTEI also has a surprisingly large 40% of Australia’s high technology electronics design and manufacturing industry.

The origin of the South Australian Electronics Industry 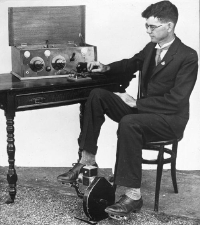 The electronics industry had its origin in Adelaide with the pioneering efforts of two early firms. In the 1920s the Reverend John Flynn OBE proposed a ‘Flying Doctor Service’ for the people in the sparsely populated Australian ‘outback’. This medical lifeline required radio for communications, as most outback properties had no telephone. A mutual acquaintance referred Reverend Flynn to a young Adelaide electrical engineer Alfred Traeger, who in 1928 produced a novel two-way radio for outback homesteads to communicate with the new Flying Doctor Service.  As most of the homesteads had no electricity, this equipment was powered by a generator fitted with bicycle pedals and cranked by the seated operator. It soon became known as the ‘pedal-wireless’ and was the beginning of the Traeger Transceivers business.

In the 1930s while Professor Frederick Terman was mentoring his former students William Hewlett and David Packard at Stanford University, Physics Professor Kerr Grant was mentoring his former students, brothers Edward and Donald Both at the University of Adelaide. Professor Terman and Professor (later, Sir) Kerr Grant independently recognised the combination of engineering knowledge and innovative ability in their former students and encouraged and directly assisted the establishment of businesses to commercialise their students’ innovations. The early history of Hewlett Packard is widely reported; from the development of their first product in 1939 – the Model 200A Audio Oscillator – in the Packard family garage. The first Both product in 1932 was not widely reported. It was a revolutionary portable, battery operated, direct writing electrocardiograph which overcame the limitation of the processing of the trace in the previous photographic recording process.1  This was the origin of Both Equipment Ltd.

The growth of the industry is … rocket science

The Adelaide electronics industry expanded after the opening of the Long Range Weapons Establishment laboratories in the Adelaide suburb of Salisbury in 1947. These joint UK/Australia facilities supported the test of rocket weapons at Woomera, 450 kilometres north of Adelaide with tracking, guidance and telemetry systems. 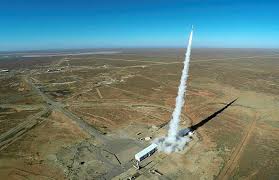 While the rocket range is no longer in regular use, the Salisbury laboratories have expanded and are now known as the Defence Science and Technology Group (DSTG). This is the Australian Commonwealth Government’s principal defence research establishment with high level expertise in communication, computing, surveillance, control systems and defence related technologies. This facility has a staff of more than 1,000 engineers, scientists, technical and support staff.  Electronics has been and continues to be the principal technology employed and researched at these laboratories.

The DSTG is Australia’s major source of science and technology that is embedded in defence systems engineered and produced in Adelaide by specialist defence contractor firms, including BAE Systems, SAAB, Raytheon, Boeing and Lockheed. The continuous operation of the DSTG research facilities and the associated defence contractor firms has been a major influence on the development of the cluster of Adelaide HTEI businesses. First as a creator of innovative technologies for military, commercial, industrial and scientific applications and second as a critically important training facility and a place for collaboration of electronic engineers, scientists and technicians.

The rigorous research methodologies and technology standards of DSTG provide a source of tacit knowledge which flows into and greatly benefits the local electronics industry. The defence budget varies and in downturns many former DSTG employees have moved on to employment in the defence or non-defence electronics industry.  Several collaborative professional relationships developed by staff at DSTG and contractor firms have evolved into entrepreneurial startup businesses in the defence and non-defence HTEI sectors in Adelaide. Many of these now established firms produce multimillion revenues and now employ many hundreds of staff in Adelaide. DSTG has thus provided the electronics industry in Adelaide with the services of a “surrogate university”.2

Electronics has another dimension beyond the design and manufacture of overtly electronic products and systems. Electronics is also a critically important ‘enabling technology’ in all ‘Knowledge-Age’ sectors and is employed to sense, monitor, measure, store and process data and to control external systems. Examples of Adelaide designed and built products that are critically ‘enabled’ by electronics include Ellex ophthalmic surgical lasers, ATRAD atmospheric radar systems and Redarc automotive products. Government statistical data classifies these respectively as ‘medical’, ‘scientific’ and ‘automotive’ products so the electronics is not identified and the value of the electronics is unreported and unseen by our community and governments.

Adelaide is well-suited for an electronics industry cluster

Over several decades the firms in the Adelaide HTEI have evolved through self-organisation into a collaborative and productive cluster. This same endogenous process applied in the evolution of the widely reported HTEI clusters in Silicon Valley California, Austin Texas and Cambridge UK.

Isolation from major populations encourages collaboration with trusted local peers in preference to distant and lesser known potential collaborators.  A sustainable competitive advantage develops in locally managed assets including knowledge, relationships and motivations “that distant rivals cannot match”. 3  Cluster participants also understand that they must “play by the rules” in a small community 4

Cluster performance is measured by the level of ‘firm-to-firm interdependence’.  In the Adelaide HTEI 43% of firms have interdependent technology-based relationships with local cluster firms while in Sydney with its large size and scattered HTEI firms this factor is measured at 13%.5

The Electronics  Industry leads productivity by 3x the average

The Adelaide HTEI is the region’s leading ‘Knowledge-Age’ industry and its annual productivity is $343,600 per employee; more than three times the $113,600 productivity of all other South Australian manufacturing industry which is predominantly based on traditional ’Industrial-Age’ processes and products.

The higher HTEI productivity which yields premium returns on its ‘Knowledge-Age’ products is a direct return on the controlled intellectual property (IP) that is inherent in the design, in the manufacturing processes and is embedded in the delivered HTEI product. Conversely, ‘Industrial-Age’ goods are produced using design and manufacturing knowledge that is widely available, so no significant premium can be achieved over and above the recovery of labour, material and overhead costs and a modest margin.

The premium returns achieved from their IP based products allows the Adelaide HTEI firms to invest strongly in research and development (R&D), which underpins their market leadership and profitability.  Adelaide HTEI firms invest an average of 4.9% of annual revenue in R&D 6 and many of these firms invest more than double that amount.  Across all Australian manufacturing industry the level of investment on R&D rarely exceeds 1% of revenue.7

This industry sells its products on a ‘business-to-business’ or ‘business-to-government’ basis and doses not sell by retail and does not advertise in public media.  Government statistics do not adequately record the value of the HTEI.  Therefore, our community and governments cannot identify the HTEI or quantify its value to our regional economy.

Our regional economy is in transition from its past dependence on ‘Industrial-Age’ manufacturing to our logical future as an education, research and ‘Knowledge-Age’ industry region. The high technology design and manufacturing knowledge and resources of the Adelaide electronics industry are a critical requirement in this transition.

The ongoing restructure and personnel changes in the executive branch of government and the recent election of a new government provide an opportunity for the electronics industry to engage with and inform people in new positions.  All businesses in our industry can join with this industry association to promote the industry’s value and participate in the transition of our region and our ’Knowledge-Age’ future.