Sometimes my blog posts seem to write themselves.

The genesis of this post occurred during my visit to the inVOYAGE 2018 event held at the Waldorf Astoria Ras Al Khaimah, UAE. 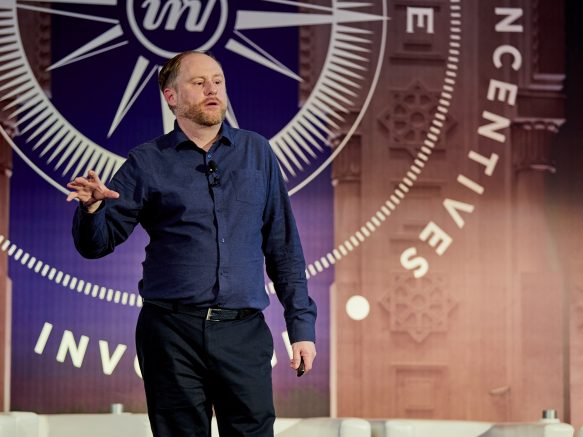 I was booked to present the opening keynote at this luxury travel event about the threats and opportunities from digital disruption, as well as subjects such as the Gig Economy, Social Media and the use of Influencers.

When I was checking into the beautiful Waldorf Astoria Ras Al Khaimah, Guest relations manager Katia Kosynska welcomed me by name. As she was not the one checking me in and had wandered across to where I was standing, I assumed that she had just taken a look at the computer screen where her colleague was entering my details.

“Mr Grill, welcome. I’ve watched some of your videos”, said Katia. Somewhat taken aback, I asked which one.

“The one about getting outside your comfort zone” she responded.

It transpired that she had seen one of my TEDx talks. I was immediately very flattered.

The next day, after I had delivered my keynote, I heard another voice yelling my name as I walked through the foyer of the hotel.

“Mr Grill, Mr Grill … can I please take a photo?” The voice in question belonged to Olga Kutsenok, a Guest Relations Manager at the hotel.

In an amazing piece of social serendipity, months before Olga had been browsing the TEDx YouTube channel and come across my TEDx talk about getting outside your comfort zone, and shared it throughout the hotel – the reason behind how Katia had seen it. When she saw the talk, she had no idea that I would be at the hotel months later, speaking at an event.

I of course agreed to a picture with Olga and Katia. 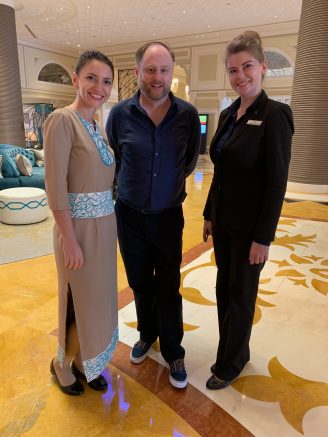 Feeling very humbled that Olga and Katia (and seemingly every hotel employee given the enthusiastic “Hello Mr Grill” welcome everywhere I went) had liked my talk, and fresh from delivering my keynote that morning, I settled into the conference as a delegate, feeling like a minor celebrity.

Later that morning, I was speaking with the closing keynote presenter David Meade (who in another act of serendipity, we both spoke a the same conference in Belfast in 2015.)

So glad to be presenting again with @DavidMeadeLive at #invoyage18 next week – we last shared a stage at the @NIChamber event in April 2015 in #belfast #smallworld pic.twitter.com/y9zTpvuAHI

I had just received a text message from someone at the hotel – one that you normally get saying “Mr Grill is there anything we can do to make your stay any more comfortable”.

I was speaking to David when I received the text, so I thought I’d have some fun. Below is the full text exchange. 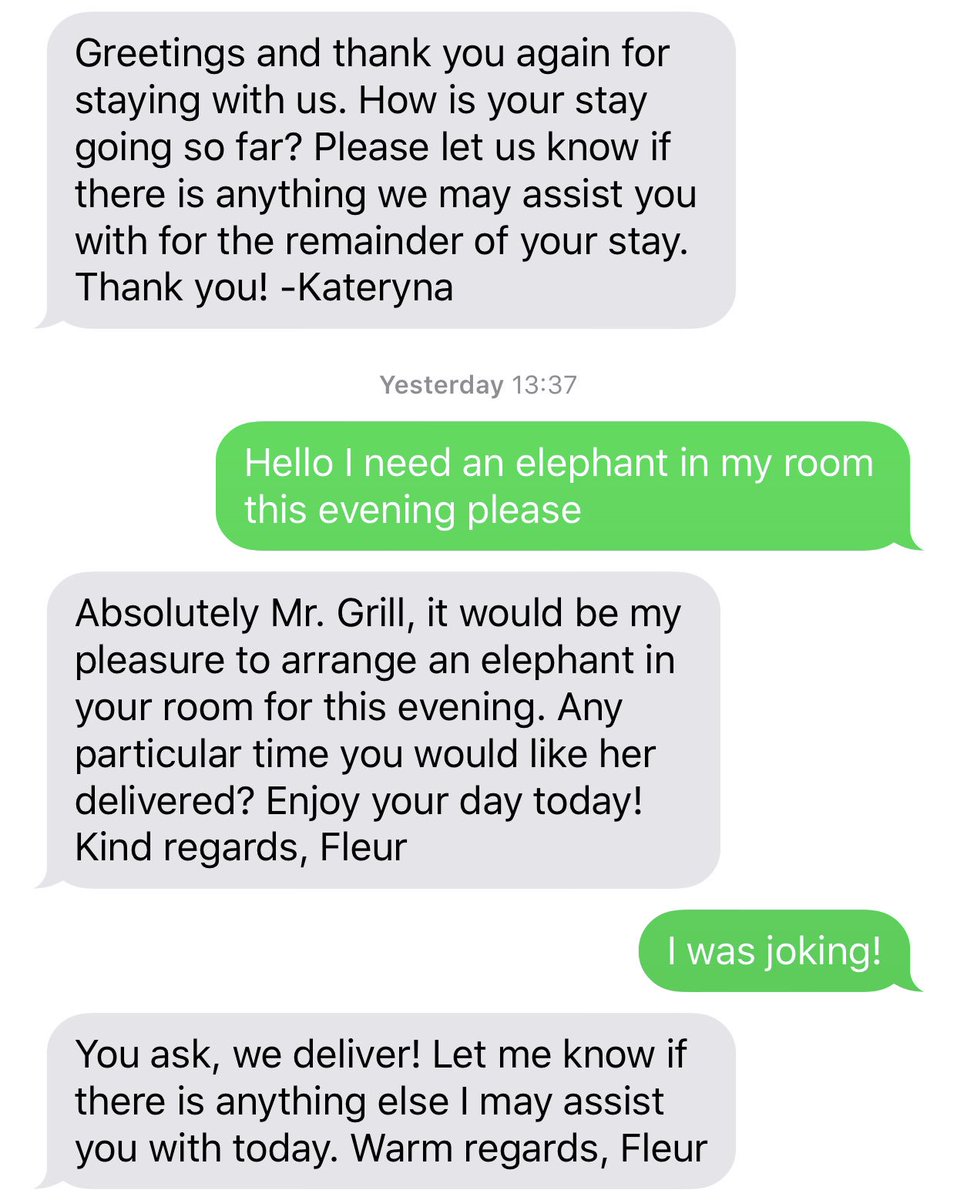 I had actually forgotten about the text, and had started to see animals made from towels in my room. The first animal that had appeared was this crocodile below. 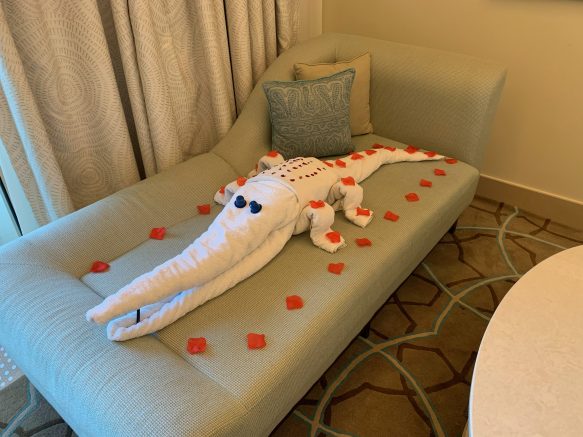 So when the second animal appeared below, I initially took no real notice. 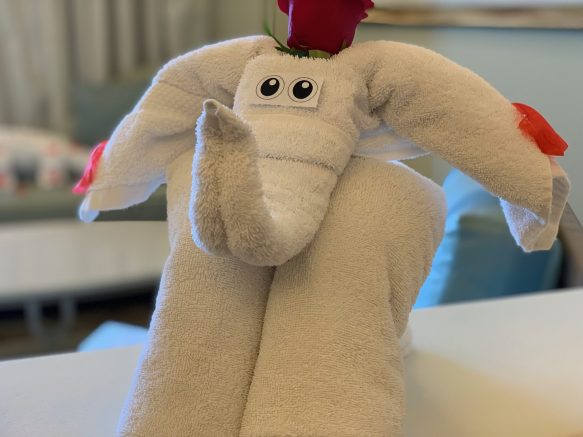 It was only when this third animal appeared that the penny finally dropped – they had delivered an elephant to my room! 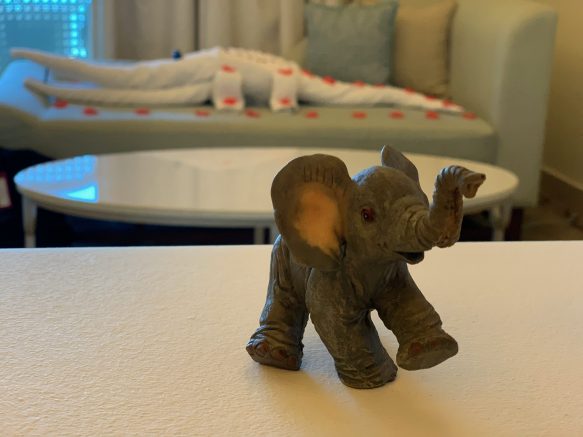 These extra touches from the hotel were incredibly humbling and reminded me that you’re never too far away from someone who consumes your content, and it is rare to meet them in real life.

Of course, I documented this very smart piece of (very instagrammable) customer service on my social channels. 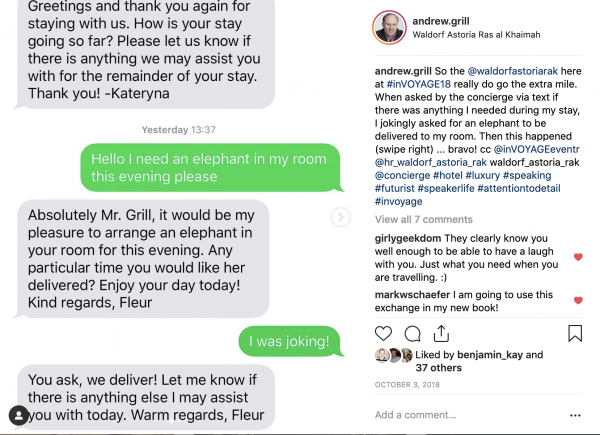 My dear friend Mark Schaefer saw my posts, and included them in his new book “Marketing Rebellion – The most human company wins“. 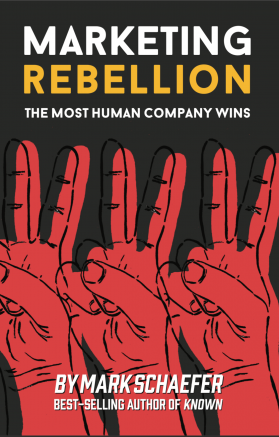 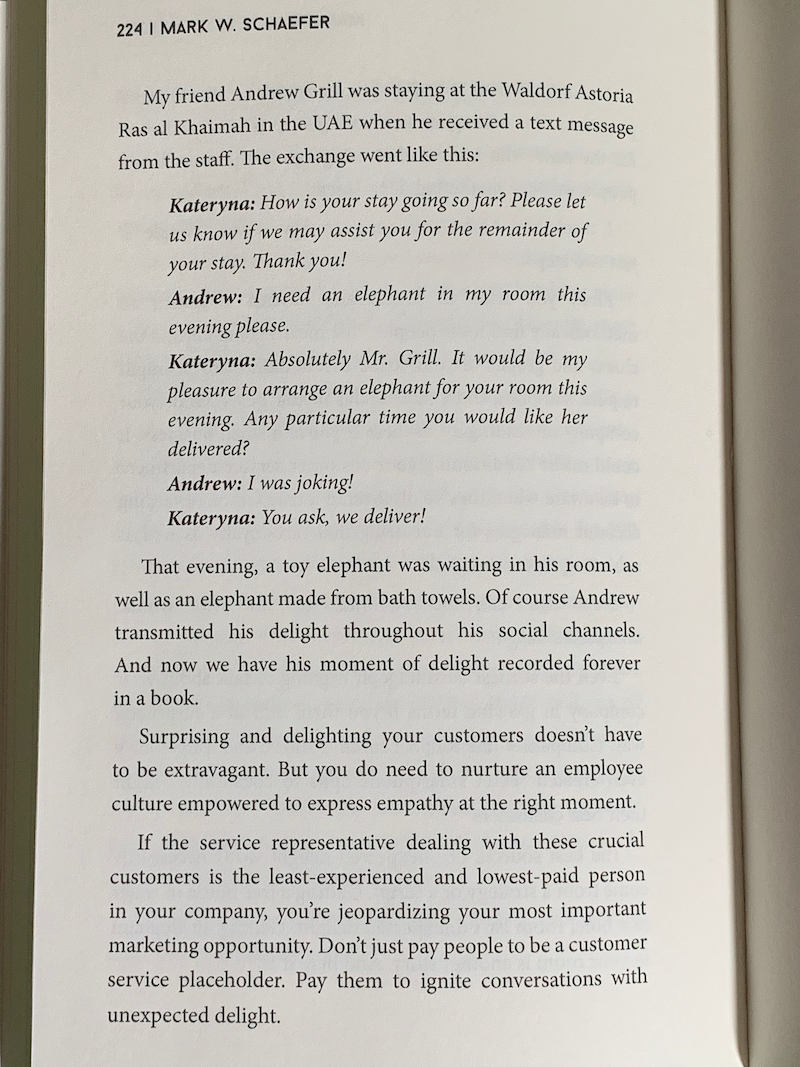 What have you done lately that could end up in a book about marketing rebels?

In August 2021, when we were able to travel again, I took my first plane trip since November 2019 (which was Amsterdam), back to Edinburgh to stay at the Waldorf Astoria Edinburgh.

I emailed ahead to GM Dale MacPhee, Front of House Manager Dean McVey and Guest Services Manager, Alexander Pages Preuss. Not only did they upgrade me to a lovely Suite (the Sir Walter Scott Suite), this was waiting for me in the room. 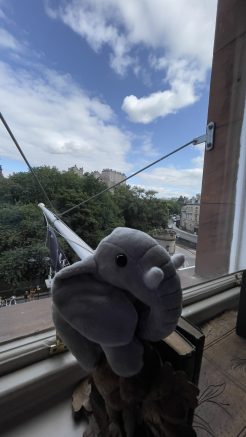 This is the blog post that keeps on giving, and a continuous example of how great customer service goes a long way.