Andrew explores data trust and looks at why we might move to trust our banks to hold our personal data in the future as consumers lose faith in existing networks holding and using our personal data.

This article first appeared on the Barclays Eagle Labs website.

I spend my personal and professional life answering the question “what’s next?” Unlike traditional Futurists such as Arthur C Clarke (who in an interview in 1974 essentially predicted the internet), I look weeks and months ahead to see what near-term future trends will become reality.

In the world of Fake News, Deep Fakes and the Facebook/Cambridge Analytica scandal, consumers are rightly concerned about their own data and also who to trust with their data.

For some time, I have been saying that in the near future, consumers will come to question the value exchange they have with the platforms they use, and will eventually want to host and own their own data.

Earlier this week I was fortunate to be able to hear from Sir Tim Berners-Lee (inventor of the World Wide Web) at an event held at the Houses of Parliament in London. 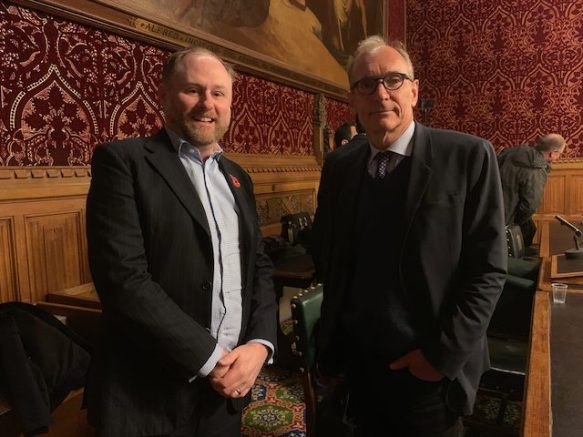 Sir Tim is rightly concerned about how his invention, created almost 30 years ago has evolved, and the shift of power from the consumer to the platform. Sir Tim says, and I agree that it is time for consumers to claim back their data.

Recently, Facebook COO Cheryl Sandberg said that if people did not want to share their data to provide targeted ads on their platform then this would be a “paid product”. As Facebook relies on advertising to deliver more than 85% of their revenue, they should be concerned if users start to demand more control of their own personal data.

Earlier this year, Google in Australia was accused by Oracle that Android users send 1GB per month of data to Google servers to better target advertising by sending such finite data as the barometric pressure measured from the device (to understand what floor of a shopping centre you are on) and even if you have just exited your car.

Google’s defence was that users sign up to “use Google’s services”, however, my view is that these platforms are now taking things too far. While I might sign to use a Google service (for free), If I knew the type, and amount of data sent back to them each month before I clicked “accept” I may change my mind.

Until now, there has been little choice about how we engage with these services and the assumptions that consumers will willingly part with their data in return for free services.

Famously, when Mark Zuckerberg was asked by a Senator in America how they made money when they don’t charge users, his answer was “Senator, we sell ads”.

I believe the timing is right for consumers to start to own their own data, and demand more of a value change each time it is used.

The concept behind Solid is centred around users having control of their own data, and only sending what they are comfortable sending to platforms. This means that when Facebook wants data on me, it will query my server and I will provide limited access, in exchange for something of value – perhaps a discount coupon, real money, crypto or some other way.

This is all very exciting, but the question then is where do I host my data?

Some of us may have a server in our own home or office to physically secure our data, but for most people, they will have to use a facility in the cloud owned by someone else.

The Solid project would provide a secure “container” for my data, but it would be ironic if I then hosted the data on an Amazon, Google or even a Facebook server.

When I met Sir Tim at the event, I shared with him an idea that I have had for a while. When it comes to personal data, it is always a matter of trust. So the question is,  who do we trust?

Probably the only organisation that we have to inherently (and legally) trust is our Bank. I have to trust that the banks I use won’t lose my money and will keep it secure from hackers and they won’t sell personal information to others.

Most countries have stringent regulations that cover banks in order for them to have a banking licence. No such regulation exists (currently) for platforms such as Facebook, Twitter or WhatsApp.

So here is my radical thought (and one Sir Tim Agreed with) – why wouldn’t our banks offer to securely store our personal data in their systems?

As an empowered consumer I want to have full control of my data, and utilising the MIT Solid project, and storing my personal data at my bank could be the future and allow us to take back control of our data.

“I trust my bank to secure my money, so why not trust them with my personal data?”