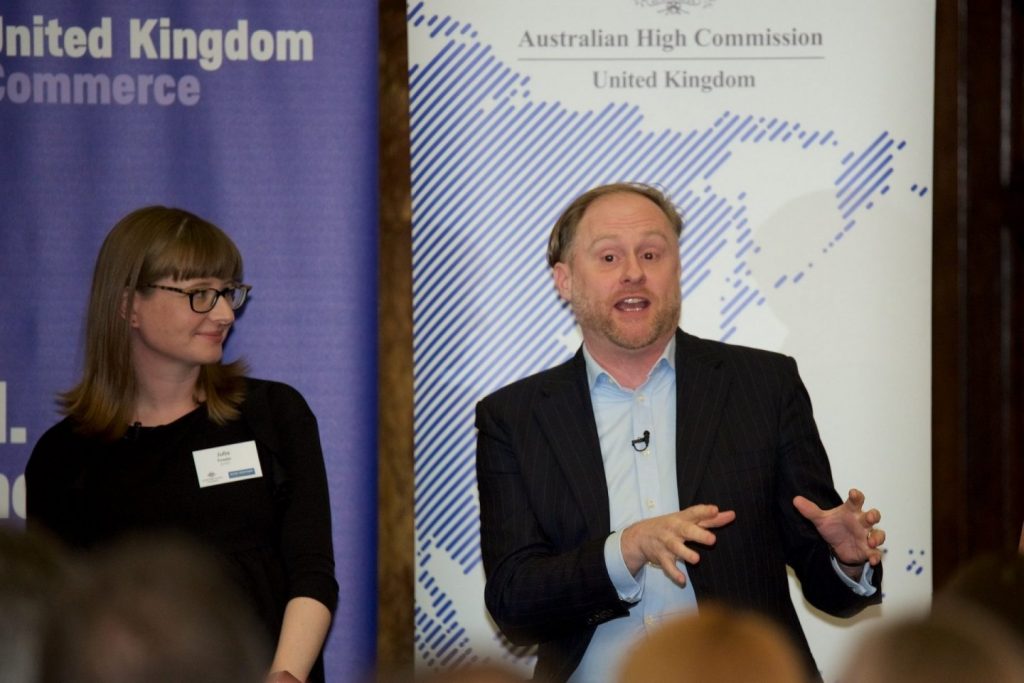 Andrew was a featured panelist at an event in partnership with the Australian High Commission to create a Global Alumni Programme.

The launch event for this series will be held on the evening of 23rd May at Australia House, hosted by the Australian High Commissioner, and will focus on Leadership and Disruption, speaking with Australians in the UK who are disrupting and innovating within traditional industries.

Whether leading an organisation that is actively transforming an industry or a long-standing company that is trying to adapt to rapid change, disruption is a watchword for leaders in today’s economy. How can leaders create positive disruption in their own fields and how should leaders respond to potentially negative disruption? We’ll be hearing from global Australian leaders in the UK that are innovating across multiple fields including retail, technology and financial services about how to make disruption work for you.

Julia Fowler, COO & Co-Founder, EDITED
Julia Fowler founded EDITED to help apparel retailers and brands have the right products at the right price, at the right time. As a former fashion designer, Julia was frustrated with the way the industry made most decisions on gut and instinct, instead of data and insight. Today the industry standard software is used globally by retailers like Topshop, Net-a-Porter and Ralph Lauren, and it leads the market in real-time analytics of pricing, assortment, and deep product metrics. EDITED was awarded ‘Retail Technology Supplier of the Year 2017’, and Julia has been named in Forbes ‘Women Entrepreneurs to Watch’, and is named on the National Retail Federation’s ‘The List of 25 People Shaping Retail’s Future’.

Andrew Grill, Actionable Futurist
Actionable Futurist and former Global Managing Partner at IBM, Andrew Grill is a popular and sought-after presenter and commentator on issues around digital disruption, the workplace of the future, emerging technologies such as blockchain and artificial intelligence, digital diversity, personal branding, and employee advocacy.

An experienced corporate leader, Andrew has launched and run technology companies in Europe and Australia and worked with and for some of the world’s leading companies including Telstra, Vodafone, Nestle, BBC, American Express, John Lewis, and Unilever. He speaks to and consults for organisations world-wide to develop their strategy in a world rife with digital disruption.

Prior to Stripe, Iain has 20 years’ experience in the tech sector in Australia and the UK, and has previously held senior positions in firms including Google, IBM and Cisco.

Away from work, Iain is passionate about making a difference in the youth sector. He is a Trustee of UK Youth, the nation’s largest and most impactful youth sector charity.

Matt Anderson, Deputy High Commissioner, Australian High Commission
Mr. Anderson is a senior career officer of the Department of Foreign Affairs and Trade and has returned recently from a posting to Afghanistan as Head of Mission.

Mr. Anderson has served as High Commissioner to Solomon Islands (2011-13) and High Commissioner to Samoa (2007-2011) and has also been posted to Papua New Guinea and South Africa. He was Chief Negotiator of the Australian-led Peace Monitoring Group on Bougainville and undertook a Short-Term Mission to Cambodia.