I’m a big fan of foursquare, I always have been but even I am getting a little fatigued. All that checking in with no real benefit is starting to make me question why I use foursquare at all.

With the recent announcement that Facebook Deals is now available in the UK, it is worth looking at what the future is for Foursquare outside of the US.

When I first came across Foursquare, I was initially sceptical, then forced myself to use it for a week in early 2010 and since then I have been hooked – until fairly recently.  Indeed some of the most enthusiastic users have started to talk about “Foursquare fatigue”.

As I have mentioned at several conferences of late, and even to some client audiences, as a 42 year old man even I have been surprised at how badly I had acquired a Foursquare habit, even being slightly miffed the first time a co-worker wrestled my “Mayorship” away from me at our office in central London.

While I am one of the strongest LBS champions around, I’m not the only one to notice that Foursquare has started to wane, and even CEO Founder Dennis Crowley feels it while compete.com reports that site visits have started to drop – so why is this?

Foursquare has not expanded their presence outside the US

If Foursquare want to extend their existing business model then they need to sign up more venues outside the US, and have them offer deals to consumers checking in to ensure that consumers perceive a real benefit from the service.

Otherwise Foursquare may never move past a location “game” and generate real revenues.  We UK first movers are starting to feel neglected – there are only so many swarms we can organise on our own without Foursquare having a local presence and doing serious deals with high street brands.

At the moment, only a handful of UK companies have signed up to use Foursquare.  Domino’s Pizza attribute Foursquare to a 29% lift in sales, and social media agency Fresh Networks recently won an award for their Jimmy Choo campaign run on the network.

But pizza and shoes aside, what can they do to become a serious alternative to Facebook deals?

Make the process of claiming a venue simple

To “claim” a venue on Foursquare, and establish an offer that can be redeemed with a check-in outside the US you need to go through an amazingly analogue process of filling in an online form and then waiting for a redemption code to be sent to you BY POST!

Late last year I did persevere with the process, so that I could access the rich venue statistics, shown below for the Visible Technologies office in London (click for larger view). 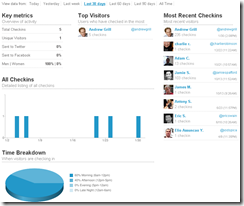 Some 6 weeks after submitting my venue information, I received the envelope below with a redemption code and a window sticker. 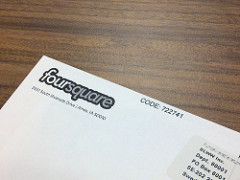 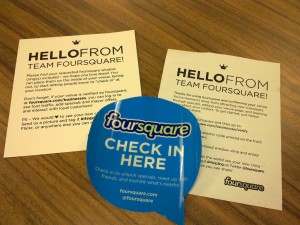 What is quite telling with the launch of Facebook Deals in the UK is that Starbucks are a launch partner.  They were suspiciously absent from Foursquare in the UK when Starbucks launched their Foursquare deal in the US.

Looking back at my March 2010 Foursquare post, I said that I thought that Foursquare had cracked the location based model.

“..Indeed mobile social networking is not about pushing more advertisements onto your phone while you are out and about.  It’s about connecting you with people and places.  The Foursquare model has a subtle link to advertising by allowing you to see offers at the places you are checked into (or about to check into).”

What I had not factored in when I wrote this was that they would only have a small business development team. Currently it seems like Tristan Walker (@tristanwalker) is their sole new business guy for the US and the rest of the world.  Without scaling this rapidly and selling Foursquare to local UK companies, I feel users may tune out and migrate to Facebook deals en masse.

Like Twitter, I understand Foursquare has ambitions to launch in the UK (summer 2011 seems to be the likely time for Foursquare), but with the behemoth Facebook already here and doing deals – is it too late for Foursquare?

When Facebook places launched in the US last August, I always thought (and still do) that the types of people that would actively use Foursquare and Facebook places would be fundamentally different.

Foursquare users probably need no introduction to location based social networking, badges, mayorships etc.  They are most likely using Foursquare for the kudos of being an early adopter and having the most badges and mayorships.

They probably also are quite savvy smartphone users, used to doing many location based activities on their mobile, while fully aware of the privacy implications.

Importantly, Foursquare users don’t need the lure of a quick deal to use the service.  The reverse is most likely true for Facebook deals, as this type of user is more of the normob (normal mobile user) and wouldn’t necessarily understand the concept of “checking in” unless it was explained to them OR there is a deal attached to the action of checking into a facebook place.

I also expect a lot of Foursquare users to be early FB deals users, but not the reverse for the reasons outlined above.  The “typical” Facebook user is probably just starting to discover the joys of mobile status updates, and some 200M of 600M users worldwide now access Facebook via their mobile.

Has Foursquare fatigue started to set in?

So I think Foursquare fatigue has finally started to set in from the all-important early adopters, and they may now go in search of tangible gratification via a Facebook deal, ironically at the same places they have been checking in at for the past year.

Watch this space – with Facebook pushing mobile social networking in a big way, it is now more likely to take off when connected with real deals on the high street.

The challenge confronting Facebook locally (and where Foursquare has failed) is to make the venue sign-up procedure easy for both large chains and small businesses, and sign up multiple venues, so the location inventory is as rich as possible.

More than once I have been asked “how do I contact Foursquare – they must be invisible”.  Facebook’s large and growing presence in the UK will ensure Facebook deals is a success.

Emily White, Director of Local at Facebook announced at an event on Monday in London that network has launched the service in a total five European countries – the UK, Germany, Italy, France and Spain – but also in Canada.

There will be four types of deals that can be rewarded via a check-in on Facebook.

Also partnering with Facebook are Mazda, offering an amazing 20% off an MX-5 car as well as a chance to win one of five cars.

Mobile operator O2 will allow Facebook users to upgrade their mobile phones giving users the chance to win a free games console. At the O2 Arena, Usher fans can get discounts on his newest music if they check-in at the Other companies include Argos, Debenhams, Alton Towers and Benetton.

Below is what the places interface looks like on an iPhone.

Head to http://www.facebook.com/deals/ to find out more about the service for both users and advertisers.