I am probably one of the world’s greatest advocates for anything mobile, except for one thing. QR codes, mobile barcodes – call them what you may.

You see, in my eyes if you put a barrier in the way of a consumer redeeming something, or using a new technology then it will never really take off.

I have yet to post my thoughts on NFC (near field communications), but with the announcement that the new Blackberry phones will have NFC built in, and Apple flirting with the idea it, then is only a matter of time before this becomes pervasive in new smartphones, just as GPS is now in all new smartphones.

QR codes sound great, however when your target audience has to actually find or download a reader to decode them, and even then it is a hit and miss affair, you know uptake will be low.

A recent QR experience has lead me to write this post.

I was walking casually along High Street Kensington yesterday, and spied a QR code in the window of a Columbia store, see below.

Try as I might, I could not get the code to read on my smartphone (a latest model Blackberry 9780).  I could not get any closer, as it was in their front window, so I was doing everything that a normob (normal mobile user) would do. 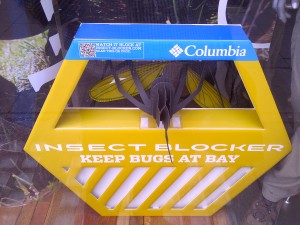 I even tried zooming in etc etc – it would just not read.  So this mobile campaign (when executed in their front window) is a big QR code FAIL

Back in October 2009, Fendi had a full page ad in the times, shown below with a QR code but no explanation of what it was for – was this a (QR) fashion statement or was someone at the agency keen to “try something new”. 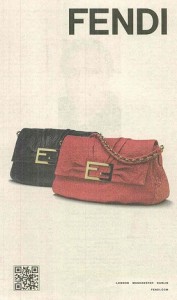 The bravest example for use of a QR code would go to Waitrose who produced a TV ad with a QR code visible for the last 2 seconds.

Just think about this for a moment.  Apart from Sky+ing (Tivo etc) the ad, and replaying it, who would be able to get their phone out and point it at the ad for the last 2 seconds of an ad when they did not know it was coming?

I actually used to be a huge fan of mobile barcodes, and in Australia back in 2004, I helped with a trial of 1D (traditional) barcodes sent as an MMS/SMS for redemption at McDonalds.

The technology did not quite scan first time, every time and it was hard to get the traditional barcode scanners to scan the code quickly.

What the trial told us was that if you had to add an extra 10 seconds to the queue time at McDonalds while you scanned a barcode,  it would never really be an option.

Clearly, just as it is with SMS, the QR reader application needs to be native – and built into the camera on every phone.  Even a quick menu item to enable QR reader would be 1000% better than a separate app. One day perhaps smartphone camera software will be smart enough to detect and decode QR codes on the fly.

Until this happens, QR codes are a just a sideshow.

What are your thoughts on QR codes? I’m afraid I continue to remain a skeptic.

Footonote: While preparing this post, I scanned the Colombia QR code from the zoomed-in image above on my PC monitor and it worked – but the fact that it did not work first time on the high street will put off normobs from trying this again.

I also tried pausing the Waitrose ad and persevered for a couple of minutes to get the code to scan – then gave up.