I was invited to an very interesting event last night at the Ivy Club in London.

Billed as the “Digital Bar Room Brawl” it was designed as an event to talk about the failure of high street companies to embrace digital, and it provoked some lively debate.

What we did not end up with though (nor were we ever going to) is a definitive answer as to why digital disruption is killing the high street.

I’ve blogged about this recently, and the issue stays the same.

A clue that digital is not entirely embedded everywhere was when I arrived at the event.

I was greeted by a man with a clipboard!! 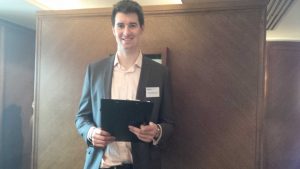 Seriously?? Ever heard of Eventbrite and their iPad entry manager app ….but I digress.

I had my 2 minutes on the soapbox (yes there was a real soap box to stand on), and I once again mentioned the lovely Molly Flatt (@mollyflatt) who was born in 1983 – the year I started online with bulletin boards and dial-up modems.

After the formal part of the evening, Molly and I had a brief chat and both remarked about how we never really learn from the mistakes of failed companies.

I am sure that behind the failure of Jessops and HMV, while we all shake our heads and say “why did they not see digital disruption coming”, there is another story or boardroom and c-level battles that contributed to their demise.

Take any “digital” conference these days (and the event last night was actually a promotion for the Digital Marketing Show to be held in London 26-28th November at Excel), and we will all talk about the things we should be doing, or the campaigns that have been super successful.

We don’t however celebrate, or learn from our failures.

What Molly and I would like to see would be a “digital failures” conference, perhaps called #failbetter.

Why not ask along the ex-marketing manager (or CEO) of Jessops and HMV and ask them exactly what went wrong?

I am sure we could fill the Albert hall with a 1 day conference where we talk about what WON’T work, and ways to avoid becoming another high street victim.

Perhaps those involved in high street failures would not want to attend, perhaps we would have to disguise their voice and have them behind a screen – but we should not keep seeing high street companies being killed by digital disruption, we should instead embrace and learn from these failures and create better, more digitally sustainable ones.

What do you think? Would you attend such a conference?