Over the 2013 Christmas break, I experimented with how I could share some of the 690+ posts (some of them actually quite good) that I have written over the last 11 years of blogging with an wider audience than I have now.

Looking at my blog traffic using Clicky, I could see that I received a flood of traffic each time I published a new post, but only reasonable levels outside that time.

Many of the posts I have written in the past 30 months or so about social business and digital trends are still relevant in 2015.

Last year I would occasionally re-tweet old posts to test the reaction from my community.

Each time, I could see a new audience was being exposed to my writing, and new people were engaging with me via Twitter, LinkedIn, Facebook and Google+.

Using a couple of excellent plugins by Ajay Matharu, namely Revive Old Post (formerly Tweet Old Post) and Buffer My Post, I have implemented a series of Rewind: posts, re-sharing my best posts from the last 18 months.

UPDATE January 2015: Since I wrote this post in January 2014, Ajay has updated the plugin, and renamed it to Revive Old Post. He kindly gifted me the PRO version to test, and it is even better than the old plugin, and the PRO version allows you to post to Twitter, Facebook AND LinkedIn at the same time, negating the need for the Buffer My Post plugin I used below.

Setting up the plugins

Both plugins were pretty easy to set up, and have a number of options – covered below.

Out of the box, Revive Old Posts tweets “from” the Revive Old Posts app, and so I changed this by creating my own Twitter app to tweet “from” “London Calling Rewind”, and updating some of the plugin code.

This “tweeted from..” indication can be seen on a few Twitter clients, but Twitter removed this feature from their own apps some time ago.

As I love transparency, each post that is tweeted by the plugin is prefaced by Rewind: so my readers know this is an old post.

The settings for Revive Old Posts allow you to specify how often to post. I have experimented with between 4 and 8 hour intervals, to ensure that my global audience gets a chance to see some old posts. As I write this post, I have the interval set at 6 hours.

You can also set which categories tweets are sent from, and also exclude individual posts that are not relevant for a re-post and should not be shared.

Finally, Revive Old Post has the option to allow me to use my own URL shortener, lc.tl to allow me to brand the links I am sharing and view detailed analytics on each link shared.

For those of you that have a YOURLS installation, use the settings below (click each image to enlarge).

Other settings below control the range of posts randomly selected for the next interval.

The facility to exclude individual posts is also excellent.

Just as I updating this post, a new version (6.8.5) has been released that lets you have a custom post schedule – meaning this is now a near-perfect plugin in my opinion. 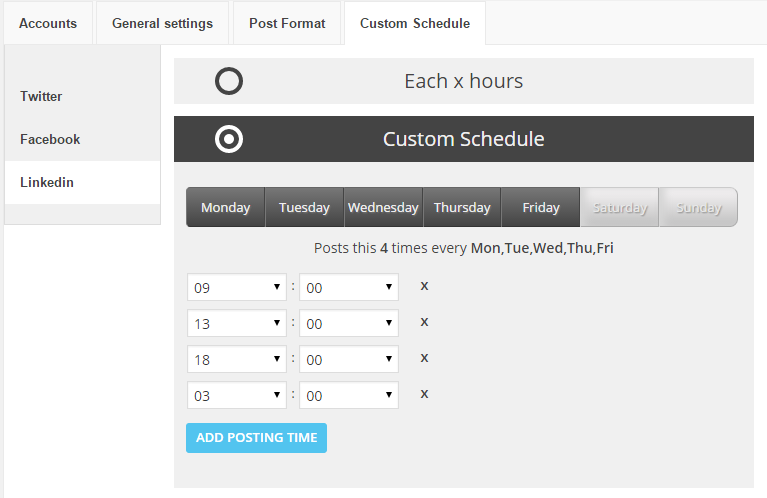 As per my update above, Revive Old Post PRO allows you to post to Twitter, Facebook and LinkedIn, so the below instructions are redundant, unless you want to use Buffer to post with a different schedule and to other platforms not covered by this plugin.

As Buffer my Post is from the same author, the setup from the plugin side is almost identical to Revive Old Post and you can exclude posts and set the frequency as well.

You do need a Buffer account (the free version allows you to have only 10 items in your “buffer”), and I have set this up to post to my LinkedIn account at 4 different times each weekday, to promote my old posts to UK/EU, East Coast, West Coast and Australian audiences in their respective timezones.

The 10 items Buffer limitation on the free version can be circumvented by having Buffer My Posts send Buffer 4 new posts every 12 hours when you already have 6 in the buffer.

What has the reaction been to Rewind: ?

Over the last week or so of testing my new Rewind: series, I have seen a greatly increased level of engagement with a number of my older, but still relevant posts.

One example from yesterday showed a great debate on Twitter as a result of a Rewind: post about Blogger transparency between @PaulFabretti, @mseasons  and @DaveParkinson. See the full thread at lc.tl/Pl

I hope you find this post and my older posts via Rewind: of interest.