Eagle-eyed readers will have noticed that this blog has taken a closer look at the effects of digital disruption over the last few months.

Not only do I enjoy writing on this topic, I believe it is at the centre of CEO thinking across the world today.

This was borne out by the findings of the 16th Annual Global CEO survey published by PwC recently and released at the World Economic Forum in Davos.

The report is titled “Dealing with disruption – adapting to survive and thrive” and looks at what is on the minds of 1,330 CEOs from 168 countries, and even @PwC_UK has retweeted the link to this post.

@andrewgrill: This disruptive decade – global PwC CEO survey shows that social has a place at the top table http://t.co/tSMqwSpDJT

Given the recent UK high street closures from companies such as HMV and Jessops, and the news that American Express is cutting 5,400 jobs, digital disruption is one item that is keeping CEOs awake at night, something that was also discussed in great detail at an invitation-only C-level roundtable I attended last week.

What also delighted me was that in the preface from Denis M. Nally, Chairman of PricewaterhouseCoopers International, he singles out social media for a special mention (click the image below for a better view). 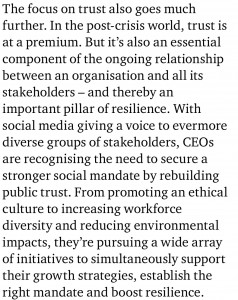 He says (emphasis is mine)

“The focus on trust also goes much further. In the post-crisis world, trust is at a premium. But it’s also an essential component of the ongoing relationship between an organisation and all its stakeholders – and thereby an important pillar of resilience.

With social media giving a voice to evermore diverse groups of stakeholders, CEOs are recognising the need to secure a stronger social mandate by rebuilding public trust. From promoting an ethical culture to increasing workforce diversity and reducing environmental impacts, they’re pursuing a wide array of initiatives to simultaneously support their growth strategies, establish the right mandate and boost resilience.”

Translating this – it means that companies can no longer hide bad news, and CEOs are now aware of the real and lasting impact that social media is having.

The report suggests that across the 1,330 CEOs surveyed, what emerged was a three-pronged approach to respond to the forces of disruption, and ensure their organisations are more resilient – namely:

I believe that it is the second of the 3 approaches “concentrating on the customer” that lends itself to a social business discussion.

On page 15 of the report, social media is again discussed, as the C-suite acknowledges that buried in all of those status updates, tweets and product reviews there might just be a goldmine of customer insight that isn’t being easily found through traditional research methods.

The study saw that 75% of CEOs say they are increasing their technology investments. See Figure 9 below from the report (click to view).

What is interesting though is that the CEOs don’t see investing in technology for technology’s sake.

“One of the most important ways that we see to drive disruption is to focus on unique and differentiating consumer experiences. That’s a fancy way of saying, ‘how can we help you do something you couldn’t do before?’ … when you look at the patterns of disruption, particularly in the area of technology, it’s often something relatively focused, relatively simple that allows you as a person to do something you couldn’t do before, or to do it faster or more efficiently. And it’s those types of innovations that we’re focused on today”

Towards the end of the report the issue of trust is raised.  The premise is that more stakeholders have more influence – see figure 12 (click to expand).

While the report shows that social media users have the least influence on business strategy (as seen by a CEO) compared to other stakeholders:

my experience tells me otherwise.

A quick glance at my blog post about the issues I had with EE last year, my appearance in the Telegraph newspaper, and more recently Sky News (see below), and I can say from a personal point of view that influencers do have a real ability to influence a company’s business strategy.

I would hope that the 2014 survey would see a significant increase from 10% for what % of social media users have “significant influence”.

I’ll give the final word to Matthew Tod who in his post on the PwC CEO insights blog titled “Social media: The cult and culture of transparency” says

“Our 16th Annual Global CEO Survey reveals that the majority of CEOs around the world are strengthening their engagement with the stakeholders they see as influential – including users of social media. And they’re right. The revolution in digital communication and information is a mega-trend, changing the dynamics of many conversations companies previously preferred to keep to themselves. It’s also providing real and rich opportunities for companies to enter genuine (and potentially more profitable) relationships with their customers.”

I can’t wait to see how the survey changes for 2014 and how prominent not just social media is, but also some real social business programs that are driving real change and growth in large companies.

If this is your first time visiting London Calling, you may wish to learn more about the author, Andrew Grill.  Head over to andrewgrill.com to learn more.