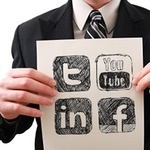 Lately there has been much talk about “Social CEOs”, and I’ve been thinking about this post for a while.

Two other posts prompted it – namely

Today the Guardian had a “sponsored Q&A” on the subject as well.

A recent Weber Shandwick study showed that 76% of global executives wanted their CEO to “be social”, and the report found that employees at companies with social CEOs say that their leader’s participation makes them feel inspired (52%) and technologically advanced (46%).

But what does it really mean to be a “Social CEO”?

I’m going to put myself forward as an example of one extreme of a social CEO – to explain how the “grades of social” might apply to different CEOs, and that I don’t expect every CEO to behave like I do on social.

I’ve been a CEO in several roles – my first being back in 2001 when I was the CEO of PropertyLook, a commercial property website. We did not have Twitter and Facebook back then, but we were at the cutting edge of digital – and I even pioneered the use of unique short links on press ads and property signboards to directly link to property listings on the website (pre-dating bit.ly by some 7 years).

@tomstandage That would make me 119 years old. Great goal for the future! 🙂

Shortly after, Michael read this post and replied, echoing my view that all CEOs should be social.

Let me lay out my social credentials for a moment and let you decide if I qualify as a social CEO.

I am somewhat at the cusp of a couple of groups. I am turning 45 this year (Gen X), so I am a fairly young CEO when you compare my age to those running much larger publicly listed companies.

I am also at the cusp of another group. I am “young enough” to have been playing with all things digital for a long, long time.

In short – I’ve been playing with all things digital and social as a hobby, now as a business for more than 30 years, and I live and breathe digital.

When “social media” came along, I adapted to it easily, and have integrated it into my daily life (sometimes integrated it too much according to my wife!)

When I became CEO of Kred, I didn’t have to learn any new tricks, I was already social.

In fact there have been numerous examples of how I have been using social while at Kred.

Those Kred members signed up to receive email will see that I sign everything with my @name – as I welcome and encourage interaction on social.

I also regularly reply to people talking about Kred, or messaging me directly.

Some months ago, after an email campaign we sent, I spotted some criticism brewing on Google+.

My natural instinct was to jump right in, posting as me to directly address the concerns of the community. The response to this was overwhelmingly positive, as people saw the CEO of Kred jumping straight in and addressing the issues head on.

But I’m the first to admit I am not a “normal” CEO. My 30 years of training and experience with social and digital, extensive media training and hundreds of speaking opportunities have made me well aware of how powerful social can be, and how to best use it.

So if you have read this far, you might be saying that I am being unfair to expect CEOs who have not “grown up digital” to jump right in and behave the same way I have.

If I am an example of a social CEO at one extreme, then how can I use my experience to advise other CEO’s to “get social”?

First of all, social media may not be for everyone. I am loathed to suggest that every CEO needs to have a social presence. An authentic social voice cannot be forced, and it certainly cannot be outsourced. Imagine outsourcing an appearance on TV by your CEO, instead saying it is the CEO, but having a PR person there.

On social, communities can quickly determine if you are being genuine and the real deal.

If your CEO is “too busy” or is uncomfortable owning their own social profile, then either get a new CEO, or don’t use social in the mix.

"Our CEO emails us saying,'I've just posted something to Yammer'" #socialfail #scrm13

A simple first step might be to get a younger member of your company to “reverse mentor” your CEO on how to get onto social, and lose the training wheels in a short space of time.

The social CEO’s of the future

The millennials coming up the ranks will be social CEO’s by default – in their eyes there is no other option. A great report on Millennial Leaders by Telefonica gives us a good idea as to what a social CEO of the future looks like

In closing, I thought I would offer some practical suggestions for CEOs (or those that manage CEOs) looking to start in social, or improve their social presence.

I’m also happy to meet CEOs in person, or via Skype or telephone to help you get started so why not contact me?

I promise I will reply.