A new study by DDI, EY and CNBC puts the spotlight on the often neglected “Gen X” segment (of which I am one), born generally between 1965 and 1981.

The report suggests that Gen X is quickly occupying the majority of business leadership roles, having grown up playing video games, spends the most time shopping online, and uses social media more habitually than any other generation – including millennials!

We hear much about “Gen Y” or Millennials, but the Gen X cohort we don’t hear much about. The study revealed that Gen X is playing a critical, and underappreciated role in leadership as organisations grapple with digital transformation.

According to the report, Gen X leaders are just as likely to be comfortable leveraging technology in the workplace: Some 54 percent of Gen X and 56 percent of millennials reported that they are “digitally savvy”.

Nielsen also found that Gen Xers use social media 40 minutes more each week than millennials making them the “most connected generation”.

The findings were published in the Global Leadership Forecast 2018 published by DDI, The Conference Board and EY with support from CNBC. The survey looked at more than 25,000 leaders spanning 54 countries and 26 major industry sectors. They found that Gen X now accounts for 51 percent of leadership roles globally. With an average of 20 years of workplace experience, they are primed to quickly assume nearly all top executive roles.

Of interest also was the fact that while Gen X is slower to advance than Millennials (due mostly to the fact that they are in more senior roles where promotion is less frequent), they also want more external coaching than coaching from their own manager. 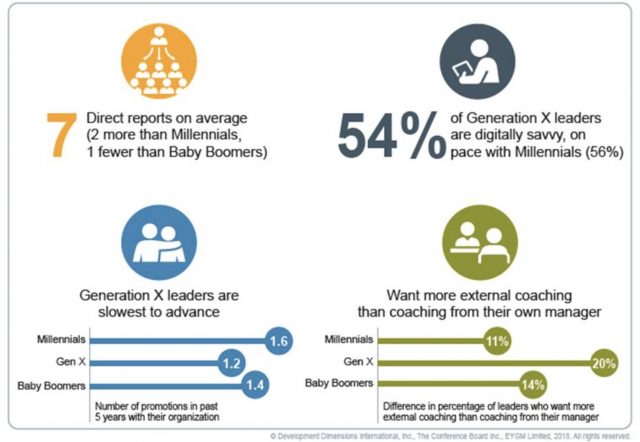 With the spotlight on Gen Y, are you overlooking your very capable and experienced Gen X workforce?