S4 Episode 18: Sanjay Srivastava Chief Digital Officer at Genpact on their partnership with the Envision Racing Team and the future of electric vehicles
S4 Episode 20: Tiger Tyagarajan - The CEO of Genpact on being a lifelong learner

Listen also via one of these apps 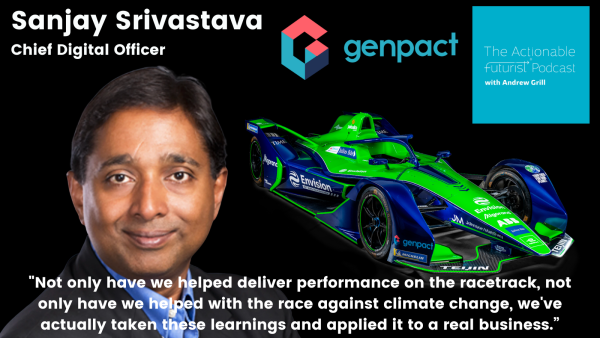 Many companies are talking about NetZero and reducing carbon emissions, but few are actively addressing the problem. Yesterday at Silverstone I had a chance to see close-up how leading consulting company Genpact is working closely with the Envision Racing Formula E Team. Formula E (E for Electric) has only been around since 2014, but in that short time they have made significant strides towards a greener future for all modes of transport.

As part of a partnership with Genpact, I was invited to Silverstone for a media day where I got to speak with Sanjay Srivastava, Genpact’s Chief Digital Strategist as well as Sylvain Filippi, Managing Director and CTO at Envision Racing, Jennifer Babington, Operations Director and General Counsel as well as Robin Frijns one of the Envision Racing drivers.

With the cars being almost identical for each team due to the Formula E rules, the competitive advantage comes from work done off the track, and at scale. Genpact powers many of the solutions to analyse the reams of data from the car after each race and provide actionable insights to tune the car for peak performance under race conditions.

In my extensive chat with Sanjay, which you can listen to above, he also explained how they are bringing the race to the fans with their Fan 360 platform – just another way to help bring the message of climate change and sustainability to a new audience.

Genpact are deeply involved with the team’s success and you will hear my discussions with Sanjay and Sylvian in full on this special episode of the Actionable Futurist Podcast.

If you’re not already following the podcast, head to the podcast page or search for “actionable futurist podcast” in your favourite app to make sure you don’t miss this great episode.

My involvement with Genpact will continue through to the London E-Prix to be held at the end of July on an exciting indoor/outdoor track at London’s Royal Docks and ExCeL London exhibition centre with an episode of the podcast recorded trackside.