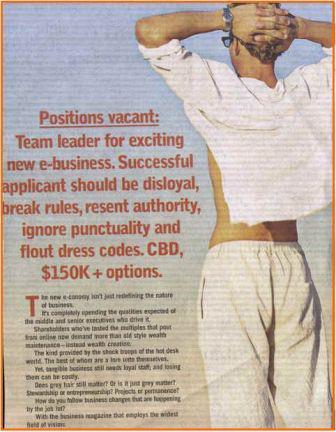 I found this scan of a full page magazine still in my website image files, and thought I would publish it to show while things have changed, in some cases they have stayed the same. This was a full page house ad that appeared in the “Business Review Weekly” in Australia in 1999. It was designed to promote the BRW as a place to read all about the new economy

Back then I was earning $A150K and I was working in the dotcom area of Telstra called Telstra.com. Dress of the day was “dotcom casual”, and we had expensive A-grade office accommodation in the heart of the Sydney Central Business District (CBD) – exciting times!

“The new e-conomy isn’t just redefining the nature of business. It’s completely upending the qualities expected of the middle and senior executives that drive it. Shareholders who’ve tasted the multiples that pour from online now demand more than old style wealth maintenance – instead wealth creation.

The kind provided by the shock troops of the hot desk world. The best of whom are a lore unto themselves. Yet, tangible business still needs loyal staff, and losing them can be costly.

Does grey hair still matter? Or is it just grey matter? Stewardship of entrepreneurship? Projects or permanence? How do you follow business changes that are happening by the job lot? With the business magazine that employs the widest field of vision.”

Scary to believe that these views were being debated as a result of the paradigm shift brought about by the dotcom era of the late ’90s.

But…how true is this today – as we lead into another “blue sky” cycle with those making big promises around mobile advertising.