I grew up in Adelaide and my family still live there. I left for Sydney in 1995 and in 2006 moved to London.

I keep resisting the calls from my family to move back to Australia, and one of my main defences is that where I’m playing (the UK and US) we are well advanced in terms of digital marketing and social media and that I’d be twiddling my thumbs for a couple of years if we moved back.

This is probably a bit harsh, and it keeps my family at bay however my eyebrows were raised when I was reading the Sunday Mail (Sunday version of the Advertiser, Adelaide’s only newspaper) on my iPad and came across a story about “SA’s top 100 twitter users”. 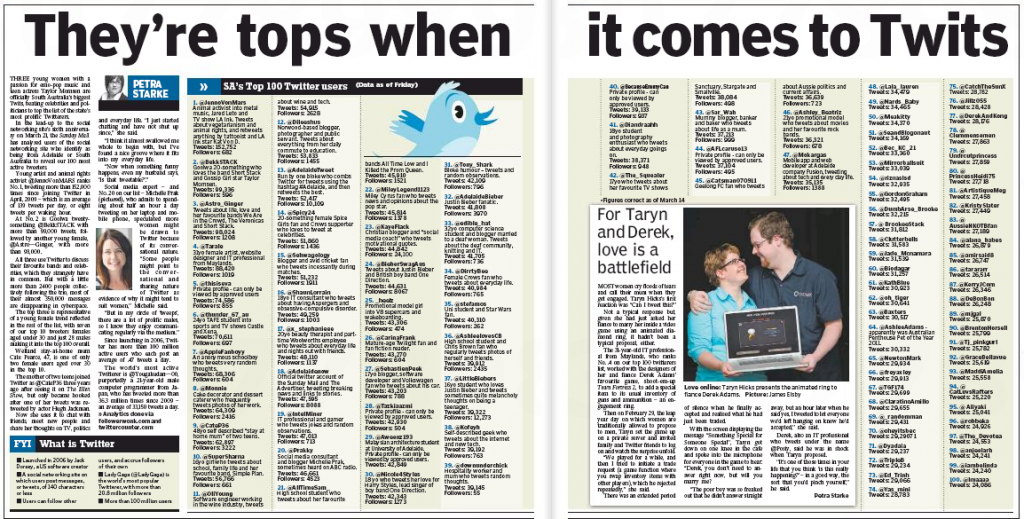 This piece helps fuel my belief that some organisations are stuck in 2009 when it comes to social media.

The Sunday Mail piece awards the “top tweeter” status based on the “number of tweets“??

If only Michelle Prak @prakky (#20 on the list, Kred score of 828/9 top communities recruitment/sailing/advertising) had consulted them this would never have happened.

Thankfully Steve Davis, Marketing Director at Baker Marketing in Adelaide also called out this article as not only wrong but unhelpful titled:

The Sunday Mail article shows where social media is in some parts of the world and what qualifies as “mainstream” journalism. I’m still shaking my head about this.

If this is where Adelaide is at in terms of social media understanding, then I’m staying put.

Update – just found out that the author of this piece is Petra Starke @petstarr ( Kred score 763/7 communities reporters/celebrity news/news) and she actually lives in New York – and writes about Adelaide. She should therefore know better from a New York perspective that no-one talks in terms of “top tweeters” based on the number of tweets from a protected account.

PS – After posting this, I received a cryptic tweet from Petra..

@AndrewGrill @prakky I could tell you that I wrote the article I was asked to write, but instead I’ll just tell you to write a letter to Ed.

PPS – if I “write a letter to the Editor” and respond in the way that old-school newspapers want me to, then no-one would have heard about it.

Instead, I tweeted you, and you responded instantly and already hundreds of people (500 at last count) have clicked on the link I shared on Twitter and are ready my response to the editor. This is the new world (and the new world for brands also).

For a very reasoned view on this whole issue – head over to Michelle Prak’s blog and read what she thinks.