Finally, on Wednesday, Facebook CEO Mark Zuckerberg spoke out about the issues around Cambridge Analytica’s use of millions of Facebook profiles. 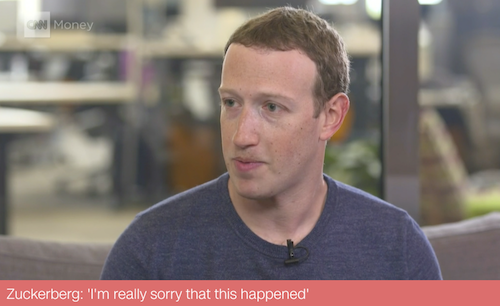 What he said, most of those in the industry had been saying publicly all week – that they had made mistakes.

What was more interesting to me was that he took nearly a week to say this.

This means that he realises Facebook has a huge problem – with their business model.

Recently Facebook has tried to rebalance the network from being a heavily advertising focused platform (with some social networking thrown in) to something closer to what the network was designed for in the first place – to allow people to communicate.

If Facebook has a problem with advertising taking over, and users and advertisers are threatening to leave the platform, then they – and all social networking platforms who rely on old-school advertising for the majority or all of their revenue has the same problem.

Most of us saw this coming.

Ten years ago in London, a group I would lovingly call “social media geeks” used to meet once a week at a pub in Soho as part of the “Tuttle Club” to talk about all things social media.

For many of us in the room at these meetings, we were hoping that one day we’d be able to make a career out of this new thing called “social media”. Many of us did, and continue to 10 years later.

Back at these gatherings, we were hoping that brands would one day takes social media seriously and pump money into it. We got our wish – but in the wrong way and now ten years later we’re in the position where social media networks are no longer a place to exchange ideas and thoughts, we have to duck and weave around ads, “sponsored content”, paid posts (but not identified as such) by “influencers” and everything else.

How did we get here? The networks got greedy.

Facebook and Twitter and co all started off without a real business model. Just like the early days of CB or Ham Radio (both of which I was an active participant in the 1980s/1990s) where people came together as a community to share ideas, the networks realised that someone had to pay for the servers, and bandwidth and programmers etc and so they were forced to adopt a business model that has been around for 50+ years – advertising.

They adopted the simple premise of allowing an advertiser’s message to appear on a social network in return for a fee.

As the networks became more sophisticated and started to learn user’s preferences (easier on Facebook because they had better demographic info than say Twitter or YouTube), then they could charge more.

So ten years later we are where we are – the data is so rich that organisations like Cambridge Analytica can via overt and covert methods assemble psychographic profiles on millions of Facebook users and use this in the US elections and Brexit in the UK.

I sense 2018 will be a year of reflection and change for Facebook.

They rely so heavily on people trusting the network to use it as much as they do, and they then need to be as attractive as possible to advertisers without annoying their users.

However – last time I looked, advertising is pretty much Facebook’s only business model. Take that away and you don’t have revenue, and hence a business or a network.

Who will come up with a new advertising model?

On TV we’re conditioned to accept interruptions in return for free programs. Conversely, the $10 a month I pay Spotify and Netflix guarantees I see no advertising at all.

Last year, ITV was showing a reboot of the old show “Cold Feet”, after a break of 13 years off-air, it became “must-see TV” and was transmitted at 9pm on Friday nights.

Being a fan of the series, I watched it “live” ie as broadcast at 9pm and noticed something very strange.

Ads. Every 13 minutes or so, the program would stop for 180 seconds to show ads!

Having invested in Netflix and an Amazon Fire TV, it has been a long time since I actually saw a TV ad. I had been conditioned thanks to my Amazon, Netflix and Spotify subscriptions to not expect ads. Seeing ads after such a long time gave me a real shock – and I realised that I was happy to pay not to see them.

Unlikely in the near term, however, if the ad-funded model starts to fail, they may need to look at how Spotify and Netflix operate with a mix of ad-funded free services along with unlimited services via a paid subscription.

I have another great example of free vs paid – in this case, an excellent case study of my use of YouTube and Vimeo for hosting my speaking videos – where I dive into the two different models in great detail and explain the pitfalls of the “free” ad-based models.

So in summary, social “advertising” is perhaps at an inflexion point. As I wrote in another long-form piece yesterday, consumers are starting to wake up to the real value of their data, and this may, in turn, start to impact how they see the value of these “free” services when the social networks are potentially extracting much more value from us than they are entitled to.

Watch this space. It’s about to get very interesting.