Following on from my post this time last year titled “The top apps, sites and gadgets I couldn’t live without“, I thought I would update the list 12 months on. I have listed my top 10 things below in the hope that they might also be of use to you.

Full disclosure: the iPad, my webhosting and website backup listed below are provided as part of an Advocate program run by EE, WebHostingBuzz and CodeGuard respectively.

All other items I pay full commercial price for and have no relationship with these companies, but I would be open to being your advocate as I love and use your products so why not contact me?

Once again Clicky appears on my top 10 list – why? It is the best web analytics program – period! Live stats, really intuitive interface and it costs me around $60 a year to monitor up to 10 sites.

They have a free version – I have been a paying customer for the last 5 years I think it is amazing. Don’t waste your time with Google Analytics – go clicky! 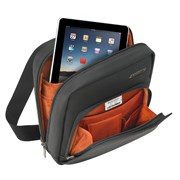 In my 2012 list, I spoke of my Briggs & Riley laptop bag. In 2013, I added to the collection with a Slide Tech Bag (VB926), perfect for carrying the iPad, a couple of phones and a detachable keyboard.  This has meant that on some days, I have just taken my iPad with me and not needed to carry around a heavy laptop.

As disclaimed above, my websites are hosted on a super-fast dedicated server from WebHostingBuzz, as part of an Ambassador program.  This page and my entire blog, photo sharing website, and all of my other services (except for hosted email) are provided on this server.

In 2013, the WebHostingBuzz team has yet again kept my sites up and running, and when I did have a problem (normally caused by a wayward WordPress plugin), they were quick to find the issue and get the site back up and running again.

When I met their CEO Matt Russell in 2011, I was taken by his passion for hosting.  As a blogger, hosting is a critical part of what I need to function. Matt told me he thought his service was great, so I set him a challenge – move my entire site from an existing provider to WebHostingBuzz and if it works flawlessly I’m a fan. It worked and I continue to be a fan of their servers and services.

Read my review of WebHostingBuzz if you are looking to start with your own server, or move from an existing provider you are not happy with.

I received a new iPad with retina display (32GB) as part of my involvement with the EE Advocate program I set up for them in late 2012.  Having owed an iPad 1 since 2010, I can say that the iPad has transformed the way I consume media. I now receive ALL my newspapers and magazines on the iPad.  It has become an essential tool for me and I could not live without it.

On long plane trips it becomes my movie player as I watch movies downloaded from iTunes, and read books on the device as well.  I no longer have a need for physical books, newspapers or magazines as it is all on the iPad.

My involvement with the EE Advocate program is set to continue into 2014, and I look forward to blogging on the new advances to the EE network, and also hope to take a peek with the other Ambassadors at their Social Hub in Paddington early in 2014 – stay tuned for  a post on this.

4. Toggle Mobile global SIM
Last year I was singing the praises of my Truphone pre-paid SIM, but in 2013 I switched allegiances to a prepaid SIM from Toggle Mobile. The reasons for the shift were many.

The price of calls with Toggle are just 3p per minute to my popular destinations (UK, Australia, US) even when roaming in these countries AND I can provision up to 9 “local” numbers on my SIM.

For example, I land in the US, and want to make a call back to the UK. It costs me just 3p per minute, and I get a local US number.  In comparison, Truphone charges 10p per minute for the same call.

Data with Toggle is also a flat 15p/mb in countries where I am roaming with a local number. You can get a local number for free for 30 days, or secure it for 12 months for just £5.

In comparison, Truphone charges £5/month to keep a local US number. Toggle also allow free incoming calls in around 20 countries.

The only negative about the Toggle service is that when you call someone in country where you already have a local number, my UK number is presented instead of my local number (which Truphone supports).

Also I had some billing issues recently because my phone was roaming on the “wrong” network in the US and I was charged the standard roaming fee rather than the 3p/minute fee. The trick is to ensure when you land in a new country that you force the SIM (via a SIM toolkit app) to use the local network and not rely on the automatic settings.

I keep my Toggle mobile SIM in my second (Android) phone and use this for all of my international calls and when I am in a foreign country to stay in touch with clients and family.

Once again, Tripit Pro makes my list because as a regular international traveller, it has become my trusted companion. Tripit is free, and allows you to email your airline or hotel reservation to them, and seconds later it is all stored safely in Tripit (accessible via the web or mobile apps). Notifications can also be pushed to social media websites.

The Pro version for $50/year (free trial here) is amazing and they will monitor flights you have saved with them and SMS or email you with gate changes or flight delays – see an example of what I mean below.

Pressreader once again makes my top 10 list. Available for most mobile devices, for $30/month I can read unlimited newspapers on my iPad – the full version – with all the ads etc.  This means wherever I am in the world (or on a plane), I can catch up on my UK, US and Australian newspapers. They have access to 2,300 global newspapers and magazines – you can also get a free trial.

Have a look at their website or search Pressdisplay in your favourite app store.  A monthly subscription also lets you read newspapers on your PC, and recently they have upgraded their site.

I had been looking for a while for a website backup solution that was “set and forget” and would regularly back up my websites and databases, with the ability to grab individual files or the whole site on demand.

One service that was recommended to me by WebHostingBuzz CEO Matt Russell was CodeGuard.

Matt put me in touch with Codeguard CEO and co-founder, David Moeller.

I spoke to David and he agreed to bring me on as a CodeGuard Ambassador. As per the sponsorship agreement I have with WebHostingBuzz, I only agreed to become an Ambassador if I could really see for myself the power of the solution – and use it for real.

You can read my review of CodeGuard, and I can honestly tell you it has saved my bacon several times this year when I accidentally deleted key WordPress files during an update, and was able to rescue them from my CodeGuard vault.

This is an open source URL shortening service (short for Your Own URL Shortener). I have been using for nearly 4 years now.  You most probably clicked on of my links shortened using YOURLS on twitter to get to this post. Even Virgin and Vodafone use YOURLS!

Developed by Ozh Richard, it is just brilliant.  Forget Bit.ly – roll your own. Read all about it and how do to this in this 2 part post featured naturally via one of my own YOURLS shortened links at http://lc.tl/url

World Time Buddy is brilliant if you are scheduling meetings and calls in different time zones.  I have tried them all and this one is the best.  They have recently released an iOS version as well.

World Time Buddy has a free version and then there is a paid version with some great extra features.

The way they present the different timezones is so clear and simple. Click the image below for a larger view.

Anuko World Clock I first saw when I was visiting Ekaterina Walter at Intel in Portland.  I think this is standard across all Intel desktops.

Instead of seeing the system clock in the system tray, you can customise it to show multiple clocks. Here I have local, NY, SF, Australia and UK times shown in my system tray.

When I am travelling, a simple glance at the bottom right tells me what time it is where it matters!

What the program does is prompt you on websites when presented with a login page. It then offers to remember the login information in a secure database.

The program has lots of options, and I have successfully moved it between new machines. It just works (and in Chrome also) – free and pro versions.

I hope this top 10 list was useful and you try out some of my suggestions.