If you are an avid London Calling reader, then you will have been following my adventures with the UK’s only 4G provider – EE (Everything Everywhere).

To recap, back on October 30th, when the new network was launched to the public in the UK, I tried to become one of their first 4G customers, but after 2 incorrect SIM cards and a flurry of misdirected Tweets later, I found myself with a viral blog post which to date has had nearly 7,000 views, an article in the Telegraph newspaper, and a couple of meetings with senior people at EE.

The other irony is that when I am not blogging, I am CEO of Kred, which is one of the top 2 influencer platforms in the world – so I know a fair bit about the power of influencers, and never thought I would become one myself.

After meeting with the team at EE in Paddington, I saw an opportunity to turn my misfortune into something positive for EE, and those others who have been affected by teething problems with the new network.

You see, even though EE is spending some £100M+ on blanket advertising on TV, radio, press and outdoor to promote the network, not to mention the £billions spent on the network itself, they seem (by their own admission) to have forgotten about how social media factors into a new technology launch.

My blog post seems to have raised the issue – to EE board level apparently, and now EE have beefed up their social media team from just 2 managing the @EE twitter account to some 50 people across all three brands.

One of my strong recommendations in my meetings with EE was that they needed an advocate program – a way to reach out to a small number of influential folks in the technology and social media space in the UK and cop-opt them to help EE spread their message, and also be real advocates for those looking to join EE those who have joined ad are having issues.

Thankfully the PR team at EE agreed, and I have worked with them to develop such a program.

UPDATE: already a win – a fellow London blogger had some issues that were not being resolved by EE, and I raised them through the advocate channel.

The result was this

I am happy to announce that the first EE advocates are:

Gabrielle Laine-Peters @gabriellenyc – chosen as she is very socially savvy and is very influential in her own right. Coupled with the fact that she often live-blogs from her iPad at key events in London, I knew she would be a perfect choice as an EE advocate.

What sealed it for me was when I let her connect to my EE 4G MiFi at the Hospital Club on her iPad, her reaction was “flipppin’ heck that’s fast – I’ll have some of that!”

Paul Clarke @paul_clarke – Paul is becoming a well-known photographer, and is often found taking amazing candid shots at events. What better way to show of the speed and power of a 4G network than to let Paul loose with his camera and a 4G connection.

Neville Hobson @jangles – Neville is a very influential technology blogger and works closely with corporate teams such as Dell, and has been responsible for the B2B huddle over the past few years.  I spoke at the last huddle and know Neville well. At this event I explained how Neville actually influences me in my technology decisions. I trust his fair and firm view of new technologies, so thought he would be a perfect candidate to test the EE network. He also tweets a lot while on the move and at conferences.

Finally, I am also one of the advocates.

For full transparency, EE has provided each of us with a 4G device (iPad, iPad mini, Galaxy S3 LTE, Samsung Note LTE, E589 MiFi) with 8GB/month of data per month for a 12 month period at no charge.

In return, EE has asked us to blog or tweet at least once a month about our experience.  I should also note that I am involved in the program in a personal capacity as an influencer and not as part of a Kred campaign and have no commercial relationship with EE at present.

On Friday 14th, Neville, Gabrielle, Paul and I met at the Hospital Club to talk about how we would be involved in the program.  Each of us remarked about the amazing 4G speeds we were getting from the network, and it is fair to say we can’t fault EE for their network speeds in areas where 4G is enabled.

Paul also commented that having the device this week got him out of a tight spot this week in a photo job – so already the advocates are seeing benefits from the program.

While Ewan was not able to join us, he did remark to me that he thought EE was very smart in doing this – as it provides a guaranteed level of exposure (good or bad) from each of the influencers over a 12 month period. 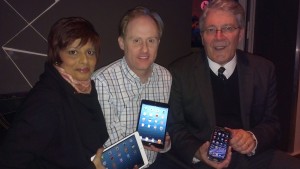 Why is EE doing this?

Well I’d like to think I had a big hand in this, following my blog post and my deep experience with other big brands, running an advocate program with the right people can deliver real benefits, and also provide valuable feedback to the product and customer care teams.  Already I have found my relationship with EE changing dramatically.

I have the contact details of people in EE that I can call directly when I see something that is not right. On Thursday, I was in an Apple store and saw some incorrect pricing for EE services displayed.  Instead of tweeting about the mistake, I emailed a photo direct to the EE team for them to action.

NO! EE have not asked for (nor would we ever agree) any editorial control over what we write. Their risk is we might write bad stories if they get things wrong.  They are obviously hoping that the network speaks for itself and we write positive articles.  In addition, influencers put their own brand at risk when they recommend a brand.  If I recommend EE and they keep getting it wrong, them my own brand (and those of the other advocates) will suffer.

Those “real world” influencers (ie non-celebrities and non-paid bloggers) have the most to lose from advocate programs personally.

What is the impact of not doing this?

Clearly if EE had an advocate program in place before launch (and I was on it), then I would never have written the blog post in the first place.  Back in 2009, I was also involved in a Vodafone advocate program and was provided with a SIM card with £500 credit per month for 12 months.  It meant that I had a relationship with the brand, and could spot and report problems quickly.

Why your company needs an advocate program

Experts have estimated that my blog post could have wiped off up to £1M of revenue – when you take into account those people and large companies that read my article and have thought twice about signing up for 4G from EE. What is painfully obvious in the age of social media, and real world influencers (none of us are celebrities or “famous”) is that you cannot ignore the power of social media anymore.  Get your brand in the hands of those that are passionate about you and the space, and great things can happen.

No longer can you trust traditional marketing campaigns and paid celebrities to attend a launch. If you forget about social as EE did, it will come back and bite you.

Thankfully EE has been smart enough to take my advice on board.  I am sure you will watch with interest what Gabrielle, Paul, Neville, Ewan and I write about EE in the coming 12 months.